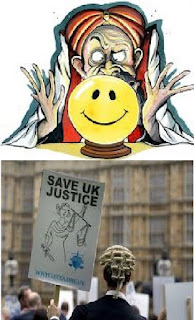 I`m not saying the Lord Chief Justice was slow to get off the mark and I`m not saying that I have crystal balls but sometimes I do wonder at the rate at which pennies seem to drop when justice  in all its facets indicates a sense of the direction in which it is travelling or being forced to travel by the executive.  Every year it seems the Sentencing Guidelines have become more prescriptive.  The aforementioned LCJ spoke recently on the emergence of AI in the courts.  He did not specify the Sentencing Guidelines but alluded to other aspects of what we call the justice system that could be involved.  Having retired just prior to the introduction of the digitilisation programme my opinions are based on what I read and hear; certainly a poor substitute for experience. On 7th October 2015 I concluded my post that day as follows:- "There are those who fail to see this changing face of justice and there are those who see it but don`t recognise it for what it really portends but the most disheartening factor of all is that there are many on and off the bench who do realise what the future holds but remain silent for reasons not always honourable  IMHO of course."

Since then there have been many changes. The Single Justice Procedure has, I believe, come in for its fair share of criticism, many more magistrates courts have been closed, national and regional magistrates have been appointed by the executive presumably on the basis that their support can be shown as an indication of general support of the magistrates on the Clapham Omnibus, video courts are being utilised as if personalities have no importance and of course legal aid is virtually non existent for defendants and a financial  loss for ever increasing numbers of lawyers. On 26th October 2016 the final paragraph of that day`s post was:- "It is only a matter of a generation before such artificial intelligences become even more a part of our daily life.  Who is to say that those advances will not include interaction with current legal processes."
Only those on the "inside" can hope to have the slightest influence on the catastrophe for individual freedom and justice which is coming our way. It seems that whilst they are in receipt of the Queen`s shilling their mouths remain closed. That, unfortunately, is the way it has always been. But perhaps there are still some who can voice their opinion without fear or favour to avert the coming disaster.