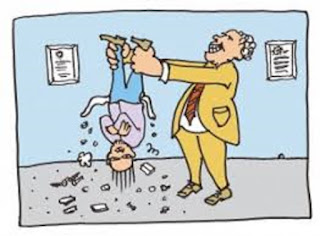 It is perhaps not widely known that when a defendant is fined at court after conviction the fine is payable immediately and sometimes, just sometimes, it is paid immediately. There are those, however, who appear to treat the whole court and legal process as an interruption to their feckless relentless life of contempt for any kind of authority. Reading regularly in various publications of the amount of unpaid fines, Â£500 million, a Â£billion or even more........who knows the exact figure at any time.........reminded me of an experience shortly before my retirement.
Joe faced fine and various court costs of Â£190.00 and when told the sum was due on the spot protested he had no money. When he was asked that knowing he was coming to court to plead guilty had he not realised he would be fined he moved his head inconsequentially. After another ineffectual exchange he was told to turn his pockets out. He refused. The jailers were told to take him to the cells and have his pockets emptied. Shouting obscenities he was led away. The next defendant who was sitting at the back awaiting his being called eventually had a similar question put to him about paying immediately. He told the court with alarming frankness, "I was going to tell you I had nothing but I don`t want to go to the cells like that bloke." He took Â£10 in Â£ coins and small change from his pocket as a down payment and was directed to the fines office. We later took Â£25.00 from Joe!
So the motto of this little tale is occasionally the principle of deterrence really does work.