THE SUN SETS ON LAY MAGISTRATES 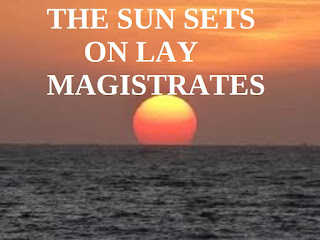 The government departments which have the greatest influence over the manner of the work that Justices of the Peace undertake are, surprise surprise, the Home Office and the Ministry of Justice. In May 2006 a previous Home Secretary John Reid admitted that when he was the incumbent the department was "not fit for purpose".  His honesty then has been borne out many times since.  The current prime minister oversaw so many failings when she was Reid`s successor it should have been a red light to her colleagues when she was placed in Downing Street purely as the least objectionable of a rum lot. But the lemmings in the Tory Party allowed themselves to be led towards the inevitable cliff where her and their incompetence are likely to bring at the best,  years of political and economic problems and street violence and a Marxist government at worst.

Faced with the problem of the Isis teenager from East London telling the media she has no regrets over her actions and expecting public sympathy the current Home Secretary touted by some as a future prime  minister with all the resources of his department behind him made public his opinion that he would seek to prevent her from returning to these shores.  Presumably he was basing that statement having consulted his permanent secretary and read his own rules as below. 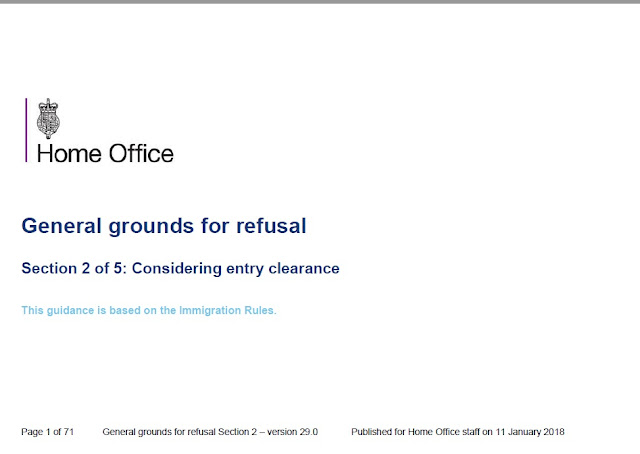 The essence of his opinion did not take into account that a British citizen cannot be made stateless.  There is no ambiguity in that fact. And the fact that the teenager in question did not have duel citizenship with rights of another country`s passport should have been apparent to him and his advisors. He now has had to backtrack and accept that if she reaches the UK border she cannot be excluded. 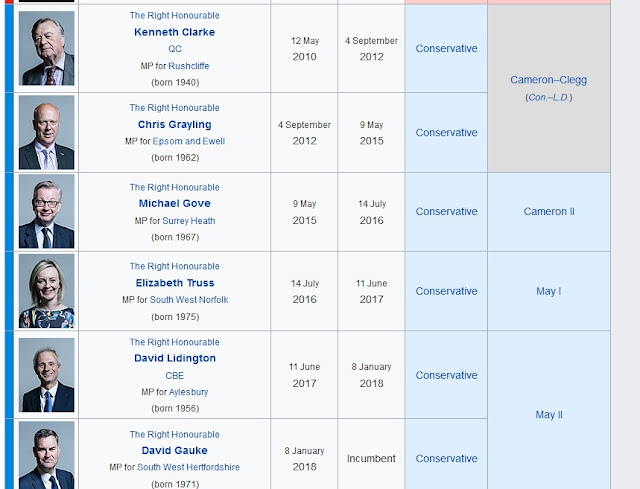 The list above of the Secretaries of State for Justice makes for sorry reading for any sense of continuity or joined up thinking in the department which runs the lives of magistrates. One hour ago the current Secretary issued a statement included in which was a very strong hint that the days of magistrates courts having the power to impose immediate custodial sentences are numbered. This is not surprising to those of us who follow such events. The dumbing down of magistrates themselves will surely follow. If they are allowed to remain on the bench it will be mainly as wingers to District Judges who will be the presiding officials. To those who will say that no government will countenance the costs involved it has been shown that if DJs sit without a qualified legal clerk or with merely a low level clerk such costs will be approximately similar to the sums paid to Justices of the Peace as expenses.

So all those inspired by the advertisements appearing countrywide encouraging applications for the lay bench enjoy the sun whilst it`s shining.  It will be dimming before long.

An Interesting View From The MA Posted on 15th January 2015
Number of magistrates down by 1,800 Posted on 27th February 2014
Number of magistrates down by 1,800 Posted on 27th February 2014
Humanitarian Aid to Palestine Posted on 15th November 2011
ONLY THE NAME WILL BE THE SAME Posted on 10th October 2019
MAGISTRATES//AGE//ETHNICITY Posted on 30th July 2015
South Yorkshire firefighters demonstrate against cuts (pictures) Posted on 01st April 2014
Merseyside Fire & Rescue Authority sets out plans to fight â€œsavageâ€ government cuts & improve firefightersâ€™ pay Posted on 22nd October 2018
SHORT CUSTODIAL SENTENCES MUST NOT BE ABOLISHED Posted on 26th March 2019
THE HOUSE OF LORDS DEBATES J.P.s` SENTENCING POWERS Posted on 08th July 2016