18 IS TOO YOUNG TO BE A MAGISTRATE 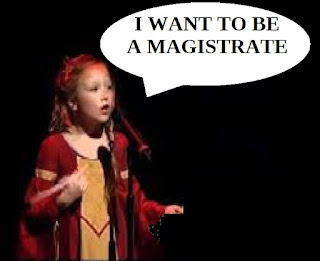 In 2012 the minimum age for magistrates was reduced from 27 to 18. I considered that a gross error at the time and still do.  The current minimum age for voting is also 18. The Representation of the People Act 1969 lowered the voting age from 21 to 18, with effect from 1970 and remained in force until the Scottish Independence Referendum Act 2013 which allowed 16 year olds to vote for the first time but only in Scotland and only in that particular referendum. Soldiers cannot be sent into combat until 18. Jurors cannot sit until 18. In contrast however.  Felons under 21 may not be sentenced to a whole life order and so must become eligible for parole. Many (most?) car rental companies stipulate a minimum age of 21 although some allow 18 year olds to rent very small cars. The legal minimum age to enter into a marriage in England and Wales is 16 although this requires consent of parents and guardians if a participant is under eighteen.

From the sample above it is obvious that age restriction rules are arbitrary. Physiologists and psychologists agree that the human brain does not attain complete adult functioning processes until the early twenties. Age and gender related politics have been a cultural phenomenon for twenty years in the West. The latest addition to this mindset is the furore we hear almost every day in one form or another over "trans" people and their so called rights. Even this morning on R4 "Today" there was a proponent on eligibility for such indeterminate people in female Olympic events.  I would posit that the virtually universal acclaim for 18 year old magistrates is as much a politically directed socially accepted position as the wish to reinstate the death penalty for treason and the murder of police officers is the direct opposite.  Similar arguments, I believe, had much to do with the Brexit argument being lost by those who did most to promote it. "Go with the flow", "be on the right side" and similar tendencies for many people not to disagree with a supposed "mainstream" have put us in this position.

A 22 year old magistrate who has barely finished his induction training gave an interview last week to BBC. I have no idea at all with whom or with what agencies he made contact prior to the event if at all. I have no idea whether he instigated such proceedings or what was sought out by the BBC or any agencies as mentioned above. All I do know that unsurprisingly he messed up.  He was quoted quite correctly as saying inter alia, "  'Being a magistrate is challenging, it does test you and your morals. It is just about following your gut instinct,'  As soon as critical comments emerged on social media the helping hands of apologists swiftly enveloped him. At the risk of making comments with virtually no detailed knowledge of this man except what has been published I`m surprised that if somebody is accepted by an Appointments Committee his aspirations in life at his age have not led him to a more inspiring place that being a Tesco till operator. I write as one whose father left school at 14 to train as a barber before becoming a British Junior Chess Champion in his late teens and who achieved many social and political positions as befitted his sky high IQ.

My opinion of a necessary requirement for magistrates amongst  many others can be summed up in two words, "life experience". I rest my case and hope he and others similar have learned from his error.