U TURN ON SENTENCING BY MAGISTRATES ASSOCIATION 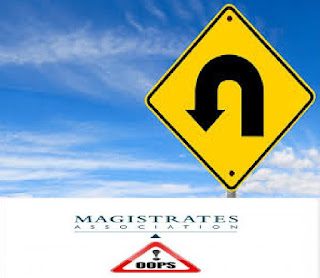 Shortly after my appointment as a Justice of the Peace like most of my colleagues I signed up to the Magistrates Association happy in my mind that the modest annual membership fee was a worthwhile payment for services received directly and indirectly.  I attended  not only local training sessions but more intimate brainstorming sessions.  Indeed at one such get together I suggested that with so many talented individuals with varied skills surely it would make much sense to invite such members to utilise their skills in direct service to the MA eg in marketing, public relations, statistics, informative writing, teaching etc etc etc.  This was at time when the members numbered about 90% of 30,000 JPs and when MA professional staff was minimal.  My suggestion made at the highest level was, as far as I know, never formally adopted. The MA around the millennium sponsored an interactive forum on its website after an initial member`s attempts failed. That effort ceased after a few years coinciding with the beginning of the government`s initiatives to bring the magistracy under closer control and at a stage now where HMCTS treats magistrates as unpaid employees and the MOJ appoints magistrates to represent magistrates. It was only around the millennium that government advisory panel considered increasing magistrates courts custodial powers to twelve months.  Now we have a situation where an emasculated probation service is being lobbied to take over all previous instances where custody would have been employed to ensure rehabilitation of a high order is available for the 4% of such offenders from well over a million cases annually where immediate custody is the outcome. This week the MA announced its backing for the abolition of all custodial sentences less than eight weeks. I would ask the Association upon what basis does it have its members` opinions to make such an announcement which is a major policy turn.  There is no doubt that heavy pressure must have been applied by government and that is its prerogative but if the Magistrates Association, a mere rump of its previous incarnation with only about 80% of the current 16,000 JPs as members, makes such an obvious U turn on its members` behalf the process of that decision being made must be made public.