US AGAINST THEM:WHEN NOT IF 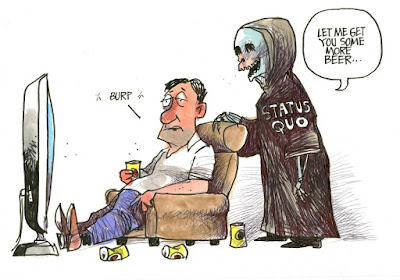 There is no doubt that at many levels the criminal justice system is badly damaged if indeed "broken" is too severe a description; an opinion I do not hold. The civil courts still manage to operate with a modicum of fairness to those who use it.  Its being employed by very high net worth individuals to settle their disputes and divorces lines the pockets of those lawyers who specialise in such matters where legal aid is akin to band aid for billionaire pop stars.

It is unquestionable that there is a great temptation for unrepresented defendants in magistrates courts to plead guilty to "get the matter over with at the lowest possible cost".  Even before the introduction of Grayling`s iniquitous Criminal Courts Charge I as well as many colleagues had the personal experience of explaining to such defendants the downside of such hasty ill considered decisions often to little avail. For many years and with varying frequencies depending on the MOJ press office priorities and the loudmouth of the newest Minister to sit in Petty France, there have been hints that short custodial sentences ie those handed down by magistrates courts should be abolished.  The last few months have seen a resurgence of such "hints" on social media. Then a few weeks later we are told that the probation service grievously wounded by Grayling amongst his other failings is to be given a new lease of life as a quasi nationalised service in 2021. Every month prison numbers are published.  Most recent figures below:-

All manor of the MOJ`s arts and crafts are employed to reduce these numbers including the automatic release after half a sentence has been served. But the current judicial system just like the current political system is not fit for purpose.  Every day in every magistrates court in England and Wales benches (and District Judges MC) are making decisions which fly in the face of common sense and purpose. This is but a single example.

The very basis of the pillar of justice can no longer be relied upon whether "justice" is used in its simple legal definition or its application to the trials through which many of the public are put when dealing with government departments.  The NHS eg is considered by many to be a totem; to be sacrosanct in its current form when such a system is demonstrably failing those who bet their lives on it. But any who dare utter any criticism are regarded as pariahs.  There is so much gone awry in our politics in its widest form that in historical terms indicates a populist uprising of "us" against "them" is but a matter of "when" and not "if".