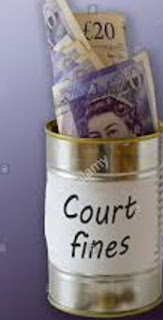 Today the MOJ released its latest batch of criminal justice statistics.  No doubt most major news outlets and commentators  will be giving their opinions on what they all mean and then the politicians will weigh in.  I cannot and will not compete with that but I can comment on just a snippet of information from the myriad of numbers below which can be seen more clearly with the Windows magnifier tool.  They cover the years 2007-2017

The inflation rate in the Â£ over those ten years was 31.89%. The average fine (top of table left) in 2007 was Â£172 and ten years later (top right of table) was Â£256; a rise of 49%.  At the other end of the scale for fines over Â£10,000 there were 276 offenders in 2007 and in 2017 such offenders receiving over Â£10,000 fines numbered 2695. That major increase seems to be a direct policy result of using fines as punishments in place of other outcomes. There is much to decipher in this table. Readers more acquainted with statistics might have their own knowledge and opinions.