CHICKENS HOMING IN TO THE MINISTRY OF JUSTICE 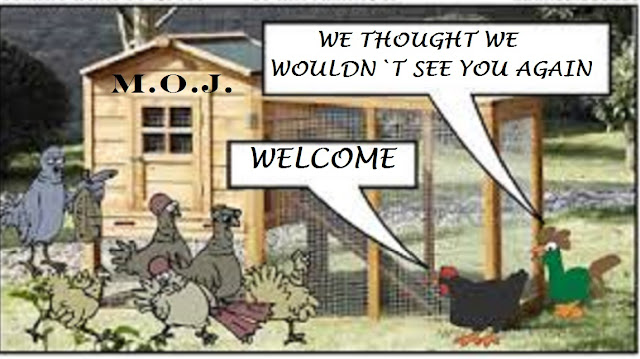 I have long advocated here and elsewhere that offending drug users should be removed from the court pathway and transferred willingly or otherwise to a medical pathway where they can be treated for their addiction under lock and key until it is considered that they are no longer dependant. These institutions I have described as workhouses for a modern age. To view such posts type "workhouse" in the search box.

It seems that the Sentencing Council in its wisdom has made wide sweeping changes in its Guidelines for sentencers of addicts (and others).  This is a promising start for such cases.  Around 70% of violent and/or acquisitive crime is committed by addicts. Police have more or less washed their hands in pursuing cannabis possession for own use.  It is only a matter of time until contrary to the opinions of some outspoken right wing so called thinkers a format will be achieved to remove cannabis possession from the criminal law.  Until such time those responsible for our judicial system like its political counterpart will have to undertake radical  revision of processes which are so obviously not fit for purpose. The country is in a mood for change.  It is a dangerous time. My fear is that if clear thinking people in positions of power and influence do not appreciate the problems only a short time ahead of us decisions will be taken out of their hands. The complete and utter incompetence of Theresa May and her Cabinet have changed our political landscape for ever.  There is a high risk that dark forces will prevail to fill the vacuum of the current lot of MPs who have lost the confidence of those they should be representing.

I have not been a supporter of much of what the Sentencing Council has produced in the decade or so of its existence. But this much is clear; the public will not for much longer tolerate sentencing which allows so many custodial outcomes to be suspended nor automatic release from custody when only half or less of a sentence has been served.  The Ministry of Justice since 2010 under that arch EU appeaser Kenneth Clarke has been deprived of such amounts of capital that it is a miracle that it still functions. It cannot continue.  The chickens at the Home Office have come to roost. The door is open at the coop at Petty France.