SOFTEST OF TOUCHES AT YOUR REGIONAL MAGISTRATES COURT

I have been posting on the problems of court interpreter services for six years.  Before I retired I was in a position to report from the "front line".  Now like most of us who become aware of so many matters from media of all kinds my knowledge is limited. It appears that I am in good company. The Ministry of so called Justice does not know or says it does not know of the true extent of the problems dealing with those witnesses and defendants who say they require the use of an interpreter. Those last few words are quite deliberate.  There is no requirement for an objective standard to be used when a court assesses the need for such services. Whist an active bench chairman I (and my colleagues) was often faced with a defendant at pre trial stage requesting an interpreter when to all intent and purpose that person`s age, apparent intellectual capabilities, occupation and years of UK residence would indicate that his/her knowledge of English was well able of being of a standard to understand and partake in court proceedings.  I recollect all too often after clear questioning of a defendant my observations that an interpreter would not be required being over ruled by the legal advisor stating more or less that the court is powerless to refuse such a request even when the situation would suggest otherwise.  An incident comes to mind when an Arabic speaking interpreter failed to turn up. A colleague whispered to me that he was fluent in an Arabic dialect very closely associated with the defendant`s.  I asked him to interpret for the court for the short time required to formally adjourn.  In the retiring room the legal advisor told me my actions were borderline if not misconduct at least putting into jeopardy the impartiality of the court.  I told her I`d do it again in similar circumstances where the alternative was further delay and time wasting for all involved.

The statistics below would not reflect that situation.  Courts are afraid to even think the term "robust". All manner of means are employed to reduce costs even when justice itself is at risk but when it comes to the treatment of offenders truly the softest of touches is not soft enough for some at all levels from Petty France to what was once upon a time your local court but now is your regional magistrates court. 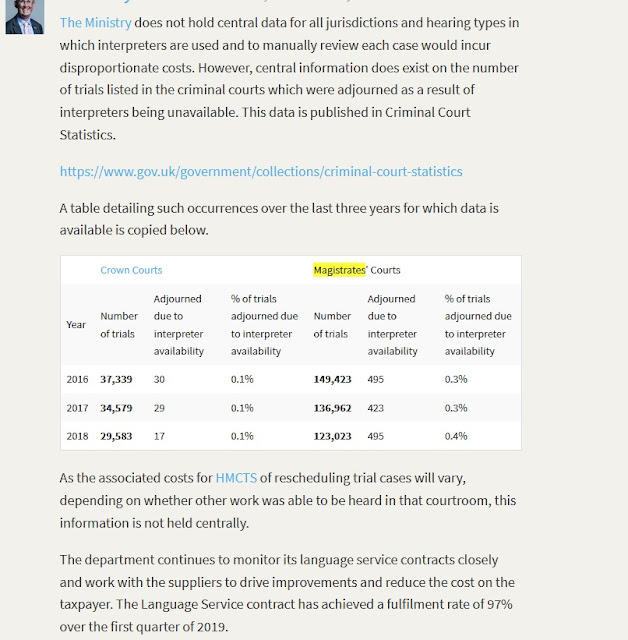