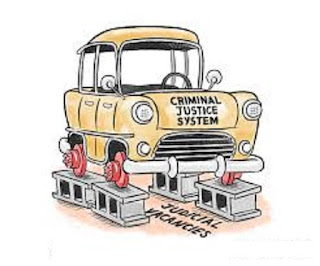 There is no doubt, unless the opinion is emanating from an MP on the Tory side where it`s waffle from dawn to dusk or from the Opposition where it`s based on, "they`re wrong whatever the topic", that most clear thinking individuals when pressed will admit to apprehensions about our justice system.  For this short post the justice system is a loose term encompassing the process from the law being broken to a defendant being found guilty or acquitted. In order to bring a defendant to court s/he must first be arrested for an alleged offence. However only about 8% of such people are actually charged.  In the last eight years the number of prosecutions has fallen by around 45%. Eight years ago there were just under 900,000 cases at magistrates and crown courts. Latest figures are just under 500,000. Ten years ago there were 20,000 more warranted police officers than there are currently. And nine years ago in Bradford the crown court was being overwhelmed with cases it could not handle with available resources. I posted on this particular city`s problems in this regard on 13th April 2018 with reference to an earlier post almost eight years prior.

It seems that the situation in Bradford is no better now and arguably worse as the parliamentary answer of last week shows below.  For the complete exchange access is here.

Our justice system as an appendage of our total democratic system can now be summed up by just those two words "How awful". 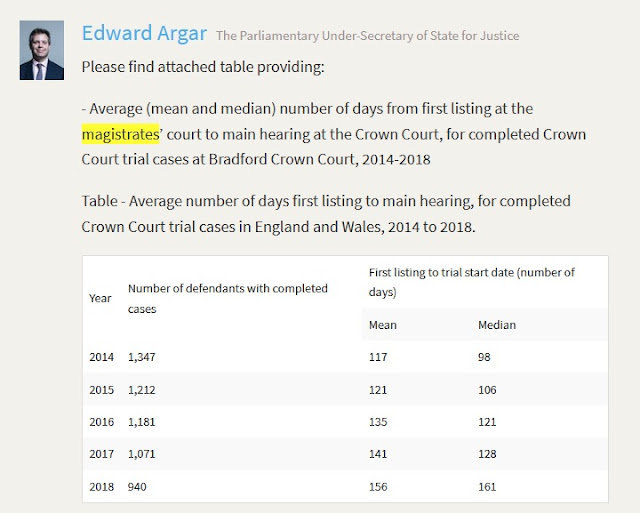 Chief: Police Service â€˜in an awful placeâ€™ Posted on 13th November 2013
Bill Bratton says Met officersâ€™ morale is â€˜awfulâ€™ Posted on 03rd September 2011
Why the Police should be a Mickey Mouse outfit ! Posted on 17th June 2012
Statement from National Union of Teachers after teacher stabbed to death Posted on 28th April 2014
Sharp end Posted on 31st March 2012
HIOWAA Charity Shop a Huge Success Posted on 14th May 2012
Walking D-Day by Paul Reed Posted on 03rd July 2012
Don't Throw it away! Posted on 11th January 2013
Two items of interest Posted on 09th December 2013
I know I can, Iâ€™m sure I can Posted on 10th September 2011