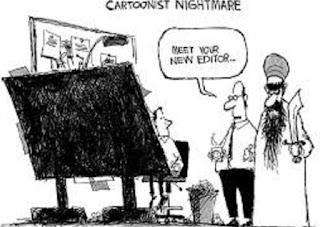 For the first time since this blog began in 2009 I have no hesitation in using my whisper of a voice in copying in full the just published article from CIVITAS on the topic of a proposed definition of that contrived word "Islamophobia".  With magistrates being crucified metaphorically of course if their language deviates from what the MOJ language police deem appropriate this should not be without interest to many whose words are scrutinised as if there were a mistake in the number of angels on the proverbial pinhead.

What next for attempts to define 'Islamophobia'?
One of the outstanding issues that Theresa May left for Boris Johnson’s government to pick up this summer concerned demands for there to be an officially-sanctioned definition of 'Islamophobia'. Campaigners have long been calling for one, and the All-Party Parliamentary Group (APPG) on British Muslims increased the pressure late last year by producing its own definition, describing Islamophobia as a ‘type of racism’. Given that Muslims are of a religious faith rather than a race, this is nonsensical.
Any such attempt to protect Islam from criticism is also a serious threat to free speech, as a new Civitas publication warned this month. The collection featured authors including Peter Tatchell, Richard Dawkins and a range of different religious and secularist commentators, and was edited by Emma Webb, director of Civitas’s new Forum on Integration, Democracy and Extremism. As Prof Dawkins put it succinctly:
‘Hatred of Muslims is unequivocally reprehensible, as is hatred of any group of people such as gay people or members of a race. Hatred of Islam, on the other hand, is easily justified, as is hatred of any other religion or obnoxious ideology.’
But while Mrs May’s government rejected the definition proposed by the APPG, it did agree that there should be a definition of some kind and set in train a process  to decide a form of words. The appointment of one of two intended advisers was rubber-stamped in haste in her final week in Number 10.
The new prime minister must decide now where this process goes next. The most prudent course would be to abandon it.