THE WRONG SIDE IN MITIGATION 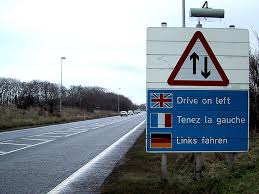 The tragic case of Harry Dunn, the motor cyclist who was killed by the wife of an American diplomat who was driving on the wrong side of the road has faded from the headlines but what will not have faded from the memories of all British drivers who have driven their own cars abroad  is the fleeting moment when they too have momentarily dropped their concentration and found themselves on the wrong side of the road in continental Europe.  It has happened to me and I got away with it. The demands from many quarters that she be extradited  to face justice reminded me of a case I recollected from 2013.
« Je conduis habituellement à droite donc ma culpabilité dans cette affaire de conduite imprudente est moindre. » could have been the words of Alexis Fleury of Orleans in the Appeal Court six years ago. Or in English..........“I usually drive on the right so my culpability in this matter of careless driving is lessened”. And their Lordships agreed with him.
Whilst the principle and logic of the decision is immediately comprehended where does it end? If I were a resident of Outer Eurasia where use of a mobile phone whilst driving is not prohibited would that lesson my culpability using one on the ? Readers will have their own analogies in mind without much effort.