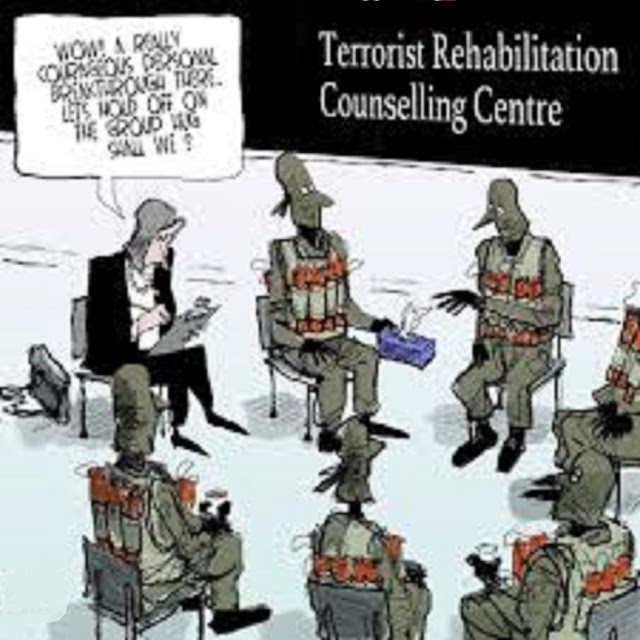 The Home Office and the Ministry of Justice are at it again. Like every government for the last twenty years crime and punishment makes its pitch for a few headlines to show that in addition to the two competitors; education and the NHS, this government is going to keep you safe by punishing the bad guys. From Tony Blair making his pitch in 1993 to today`s announcement  on tougher sentences and monitoring  of terrorists the tone doesn`t change and it`s unlikely that results will prove the benefits promised.  In essence legislation will be enacted so that convicted terrorists would not be eligible for parole and those convicted of preparing acts of terrorism or directing a terrorist organisation will spend at least 14 years behind bars. The Home Secretary has told us that there would be increased police and that a probation service ruined by failing Grayling as Justice Secretary under Cameron would be given the resources to manage offenders after they are released. This is an assurance that a probation service which cannot manage its existing priorities will somehow be able to manage an increased and more intransigent workload than ever before:  not to overlook that the increased number of police officers mentioned in the report are already included in the 20,000 additional officers featured in many of Boris Johnson`s pre election speeches.  In simple parlance that is known as double counting.  The same falsification as he has used in promising increased medical personnel and hospitals. We have been told that lie detectors will be available to assess the supposed rehabilitation of convicted terrorists when simultaneously, apart from limited use with sex offenders,  their use has been banned by law enforcement and the courts.  There is an assurance that increasing numbers of professionals will be employed in the rehabilitative procedures; namely 70 more specially trained  probation officers to take their number to 135, more psychologists to counter Islamism in jails and sympathetic imans trained to counter that same warped view held by extremists.

If only we can have confidence that such statements will lead to the measures actually being achieved and that they will bring about the results envisaged. With the fall out from Brexit set to infiltrate every particle of our society,  judging by the past is no guarantee that the future will turn out similarly but if this initiative and similar on education and the NHS are seen to fail the jackboot of populism whether of the left or the right will ride roughshod over our parliamentary system as we know it and for that eventuality, however unlikely, there will be no quick fixes from any government press office.