TO JP OR NOT JP: THAT IS THE QUESTION 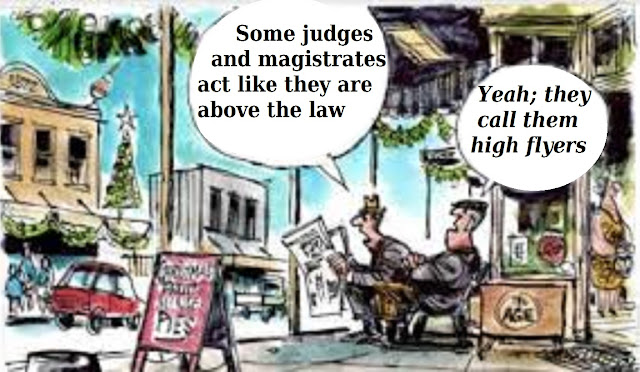 Post-nominal letters also called post-nominal initials, post-nominal titles or designatory letters, are letters placed after a person's name to indicate that the individual holds a position, academic degree, accreditation, office, military decoration, or honour, or is a member of a religious institute or fraternity.
The Lord Chancellor’s Directions to Advisory Committees from which I have copied the following would seem to make the situation re use of said letters perfectly clear:-
"Magistrates
The initials JP may be used on private and business letterheads etc in the same way as academic or professional qualifications. But they should not be used for the furtherance of trade, professional, business or political interests".
I know of at least one magistrate who is located in the West Midlands who flights that direction with impunity despite the powers that be knowing full well of her disregard for the directive. Perhaps there is an underlying cadre within upper judicialdom  which has given the nod to some and not to others because a cursory glance through the many decisions of the  Judicial Conduct Investigations Office over the last decade would reveal those magistrates who have been sanctioned for that "offence".  All of the above leads me to another possible scandal which has apparently escaped widespread  reporting in the MSN or even within the bowels of social media.  Probable new leader of her Majesty`s Opposition and former Director of Public Prosecutions Sir Keir Starmer had his leadership campaign funds boosted by £100,000 donated by a judge no less whose name is Robert Latham who sits as a part-time specialist property court judge  and who is still listed on the books of Doughty Street Chambers in London. I would not be at all surprised if there is not an action against him slowly progressing through the labyrinthine system of judicial complaints procedure. That of course is discounting the consideration that the complaints system can function on the basis of "who do you know" or "I`ll scratch your back if........."  It seems that there are some who seem to place themselves above and beyond the reach of a memo from the Lord Chancellor in 2014 stating that "judicial office holders are expected to refrain from any activity, political or otherwise, which would conflict with their judicial office or be seen to compromise their impartiality".  Perhaps it`s purely the coincidence that Judge Latham was awarded Legal Aid Barrister of the year in 2008 by Tony Blair`s wife after his nomination by none other than the serving DPP at the time Sir Keir Starmer.