THE IDENTITY POLITICS OF THE MAGISTRATES ASSOCIATION 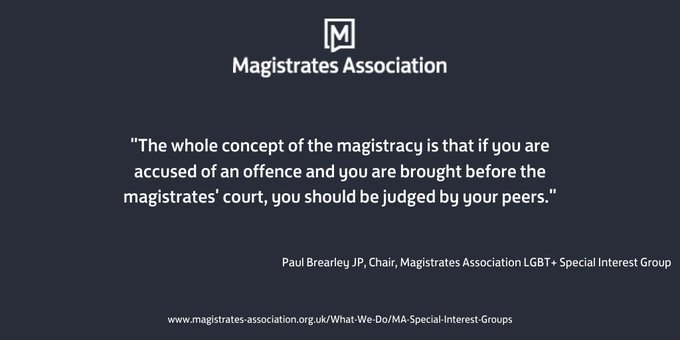 IDENTITY POLITICS:
"a tendency for people of a particular religion, race, social background, etc., to form exclusive political alliances, moving away from traditional broad-based party politics".
"sometimes referred to as identitarianism, is a political approach and analysis based on people prioritising the concerns most relevant to their particular racial, religious, ethnic, sexual, social, cultural or other identity, and forming exclusive political alliances with others of this group".
I doubt many will argue with the above definitions.  The term has been in use in various forms since the 1960s or 1970s, but has been applied with, at times, radically different meanings by different populations.  It is likely that as with so many now popular labels this one originated in America and primarily as a vehicle for black Americans to vocalise the rights as citizens they felt had been undermined by the white majority. In such a diverse society it quickly became a useful tool for Hispano Americans, native Americans and others.  At the heart of the disconnect felt by those groups was the realisation that the prejudices of white America were withholding the equality owing to them by the Constitution and that previous methods of securing their rights whether in education or one man one vote had been less than successful. It didn`t take long for the argument for such representative activities to  become a totem for the Left.  Initially black Britons aped their American examples in language, dress, culture and politics. Rarely were there any black groupings on the Right of the political spectrum.  With the immigration of over a million many poorly educated Muslims in the 1970s onwards they too saw the radical Left as their natural political home. And what a paradox that was and is: a large minority group holding often beliefs more suited to the middle ages in close alliance with agnostic or atheist gay supporting abortion on demand so called "progressives".  That this retrograde division of society has pervaded so many of its institutions is a cause for concern.  The Equality and Human Rights Commission is a statutory non-departmental public body established by the Equality Act 2006. Paradoxically this respected organisation set up by a Labour government is currently investigating that very same Labour Party for alleged antisemitism. There are however myriad groups steeped in the philosophy that must argue their separate cause whether it is the National Black Police Association or Muslim Women Network.
The image at the top of the page was published earlier this week by the Magistrates Association, an organisation which is proving itself increasingly ineffectual in its contacts with this and previous  governments which had and have their own agenda with regard to the running and organisation of the lower court system.
PEERS
"a person who is equal to another in abilities, qualifications, age, background, and social status".
There is no doubt that in today`s context  the above current definition is not strictly applicable. The jury system of "judgement by one`s peers" does not follow the above.  Jurors are not appointed or selected by the above criteria; they are or are supposedly a random selection of people whose names appear on the local electoral register.  Magistrates no longer belong to a "local" bench as they did during my time on the bench. Now there is a national bench which allows any magistrate to sit anywhere in England or Wales.  Thus the whole ethos as written at the top of the page by Paul Brearley JP Chairman of MA LGBT + special interest group is a chimera, a phantom, a non existent entity dreamed up by a failing body seeking to cause division in its ranks.
The appointment of so called "leadership magistrates" by the MOJ has not exactly helped the MA in its attempts to have a leading role in directing the future of its members.  Indeed it has followed the aforestated examples of sub dividing its reducing membership into those groupings as copied below from its website.
The MA LGBT+ Group was launched in February of 2020.
We are in the process of launching groups for BAME magistrates and magistrates with disabilities.
For more information on the Young Magistrates Special Interest Group (YMSIG), please email [email protected] .
For more information on the MA LGBT+ Group, please email [email protected]
For more information on any of the other groups, please email [email protected]

So now if a member is a transvestite, bisexual or any sexual derivative imaginable the MA has a place especially tailored for the individual. I suppose any magistrate can double his/her/its involvement if his/her/its construction serves within several boundaries. It follows that there could be established eg a group for disabled BAME magistrates or LGBT disabled BAME magistrates. Or heaven forbid there could be a right wing group of aet. 40+ white male magistrates. The list goes on and serves to demonstrate the ridiculous morass into which the Magistrates Association is sinking. Indeed a vector diagram would be useful for them. Such divisions are destructive especially in an organisation which is bound by a common oath and which has a single objective:-  "I... swear that I will well and truly serve our Sovereign Lady Queen Elizabeth the Second, in the office of Justice of the Peace and I will do right to all manner of people after the laws and usages of the Realm without fear or favour, affection or ill will. So help me God."
It is not unlikely that many will disagree with my opinion.  To those I will say only that the history of "diversity" is relatively short and that time will tell if the divisions caused by its excessive propaganda and propagation have helped or hindered a the construction of a cohesive society such a society being essential to all our well being.