ANOTHER M.A. TILT AT THE SENTENCING WINDMILL 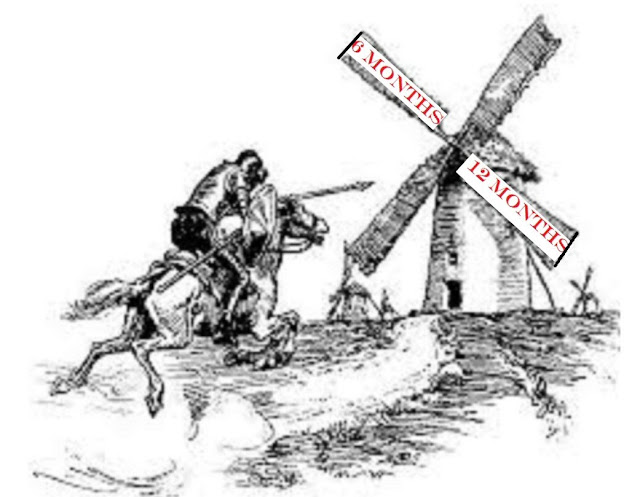 In today`s Times [behind its paywall]  Magistrates Association chairman John Bache has made yet another request from that organisation that the magistrates courts` limit of six months custody be increased to twelve.  I posted five years ago (copied below) on the arguments made by his predecessor and my opinion at that time.  In general that opinion has not changed but of course the circumstances surrounding the current argument have changed beyond recognition.  Expediency is a common reason for fundamental changes in the way our society is run when the clamour is loud enough but it often takes years for those changes to be revealed as detrimental to our well being in some form or other when what would have been obvious in the situation  had been more carefully considered before the decisions had been taken.  An example which comes to mind was the railway closures in 1963 as a result of The Beeching Report which was adopted by the then government; it resulted in the closure of a third of the rail network and the scrapping of a third of a million freight wagons.  The removal of tram systems in the 1950s and 60s to be replaced by buses was also a failure to consider properly future needs. All the tram systems installed in cities over the last decade have been manufactured abroad.  At this time of crisis it has become known there is no current vaccine production facility in the UK; a failure which the government is hurriedly trying to overcome.  And so it is with the courts system.  On one hand there are those who would temporarily  dispense with juries in crown courts and on the other lobbyists who are seeking to remove magistrates courts custodial powers entirely.  If the wishes of the Magistrates Association were to be granted consider what would be involved.  First of all there are very few offences where the current maximum sentence available is up to 12 months custody; one such is Offences against the Person Act 1861 (s.38) Assault with intent to resist arrest and another is a newly created   offence of  Assaults on Emergency Workers (Offences) Act 2018.  The vast majority of other offences carry maximum sentences of two years or more.  Section 1(2) of the 2018 Act provides that the existing offences of common assault and battery are triable either way and carry a maximum sentence of 12 months’ imprisonment and/or an unlimited fine, where the provisions of section 1(1) are met. Section 1(1) is met where the common assault or battery is committed against an emergency worker acting in the exercise of functions of such a worker. Another totally unlikely manipulation of sentencing to render the M.A.`s pleas even negotiable would be a reduction in the relatively few offences where the current maximum is two years custody. These are mainly offences under various Sexual Offences Acts.  A public reaction to lowering the tariffs to facilitate  summary or either way hearings would be politically unacceptable for a Tory government.  It is often overlooked or unconsidered in this argument over custodial limits that only slightly under 4% of all magistrates courts sentencing results in immediate custody.  The recognised overcrowding of our prisons is unlikely to be reduced by a Ministry of Justice already heavily criticised in this area if it appears to be exacerbating this situation.
It is my humble opinion that this perenial target for the Magistrates Association is akin to Don Quixote`s windmill.  Whenever a possibility appears, and this time it is Mr Bache`s lance in the spotlight, there is a quick snort and the lance is lowered ready for the charge.  It will fail this time as it has in the past and will in the future.
4th November 2015
For over a decade there have been arguments, reports and informed suggestions that magistrates should have enhanced sentencing powers; namely that the current maximum of six months custody be doubled.  No other  initiative or  sentencing possibility has been more enthusiastically supported by the Magistrates Association although whether that reflects opinion of magistrates in general is a moot point. It is not difficult to discern the reason for such changes; it has nothing to do with the efficiency or lack thereof of the crown court but everything to do with the lower cost of running magistrates` courts.  These lower costs might be self evident but are very difficult to find in an authoritative published form.  We have figures such as these but  considering that the courts are run by Her Majesty`s Courts and Tribunal Service if one had expected clear and  unambiguous figures in its annual report one would have been disappointed.  114 pages on such topics as climate change and  carbon management plan but the daily cost of running the various courts under its control are nowhere to be found.  IMHO this cannot be an oversight. It is an omission by commission.  Various ratios have been offered historically on the relative costs of crown and magistrates` courts  and from recollection the former costs two to three times the cost of the latter but I am open to correction on the detail.

These and similar arguments will become increasingly vocal in the near future because the Law Commission has recommended that the lower courts be allowed to sentence for up to twelve months custody.  As expected, Magistrates Association chairman Richard Monkhouse quoted in the Guardian was quick to endorse such a possibility, “Magistrates are trained, ready and able to handle cases with longer sentences – we see this as an opportunity for the government to trust our members to do the job they signed up for.” From the opposite side of the sentencing divide no doubt there will be a response from the Howard League for Penal Reform long opposed to magistrates` courts having any powers at all of custodial sentencing....."The Howard League repeats its objection to the use of short prison sentences, which are ineffective and damaging and believe magistrates’ over-use of custody could be prevented if they were required to remand an individual to the Crown Court for a custodial sentence".

Having been compulsorily retired by HMCTS earlier this year although the impending imposition of the Criminal Courts Charge made me jump from the good ship justice a little earlier than required  I can perhaps  reflect more objectively than sitting J.P.s on this situation.  There is an unhealthy number of them sitting only for the minimum required period demanded by the Ministry; 26 half days annually.  The actual numbers are kept under lock and key by the country`s justices` clerks but from my earlier analysis of all J.P.s  sacked by the   Judicial Conduct Investigations Office about half were for failing to sit for that minimum number of times.  I am informed by my own former colleagues that the number of two person benches is currently as high as it has ever been and that is with a reduced number of courts.  In addition there is virtually widespread agreement that training for magistrates is not as effective  it should be and that change is around the corner.  The appraisal system is not fit for purpose. These  facts alone give cause for concern.  Whilst a winger might just get by sitting for three hours every fortnight for a chairman to be competent and to be seen as being competent such a sitting level is totally inadequate.  However the Ministry is loathe to increase this minimum sitting requirement for chairmen because of the dire and increasing shortage of those eligible for the step up to the middle chair.

I doubt the legal profession is any too happy about the proposals. Young lawyers of both persuasions are unlikely to offer their services for an increased number of appearances at magistrates` courts where their financial rewards make the junior doctors current pay levels seem to be in the stratosphere.

The Law Commission`s proposals will IMHO be unlikely to come to fruition and with the impending reversal by Michael Gove over the Criminal Courts Charge likely to lead to mixed headlines he most certainly will not wish to make columns in the broadsheets by allowing magistrates increased sentencing powers at least not in the near future.

Posted by The Justice of the Peaceat Wednesday, November 04, 2015