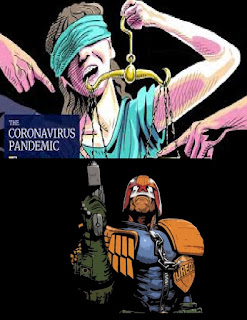 The Single Justice Procedure was initiated subsequent to my retirement from the bench and so my knowledge of such is necessarily limited.  My initial reaction on learning about this innovation was not exactly one of enthusiastic support.  It seemed that the onus was more on expediency than innocent until proved guilty.  It is therefore quite interesting for me to copy from today`s announcement from the Courts and Tribunals Judiciary of the experience of a magistrate operating the SJP.  One point he makes is quite remarkable insofar as he writes of dealing with 60 matters in his two hour shift whilst acknowledging the juggling and use of two or more on line facilities simultaneously including communication with his legal advisor.  Readers will have their own opinions of the benefits of this method of streamlined justice to those outside the offices of the MOJ in  Petty France; namely the defendants.

As we continue to find out how judicial office holders are adjusting to new ways of working during the Coronavirus pandemic, Ben Yallop, who is a magistrate in North Hampshire, describes his experience of sentencing from home.

On 28 April I sat in the Single Justice Procedure (SJP), one of the first few magistrates to do so without being physically present in a court building.

SJP enables a single magistrate to deal with minor criminal offences such as travel fare or TV licence evasion. My experience has been of traffic offences: speeding, no insurance and other similar matters. A notice is sent to the offender who has the chance to enter a plea and, if appropriate, mitigation. Those admitting guilt who indicate their willingness to be dealt with online, and those where no plea is received but where the case can be found proved, are sentenced by a single magistrate working with a Legal Adviser. SJP was introduced about five years ago and is recognised as an effective, proportionate and fair way to deal with a large number of straightforward cases quickly, allowing time to focus on more complex and contested cases.
Working together

Ordinarily, lists are dealt with in a court building although not usually, in my experience, in a courtroom. The magistrate and Legal Advisor work from an iPad and laptop respectively in the retiring room. Following permission from the Senior Presiding Judge for a short period of remote working while government restrictions are in place, the Legal Adviser and I remained in our respective homes, as it happens about 12 miles apart. The Legal Adviser sent me the court list in advance via secure email, and I was able to check it as usual to ensure that I did not know any of those charged personally. He also directed me to relevant Sentencing Council guidelines before we started.

We were face-to-face through our laptops using Skype for Business. To begin I had to confirm that I was alone in the room, that I would not be disturbed and that my ‘Display Screen Equipment’ was appropriately set out. The Legal Adviser had two screens in front of him, one with the HMCTS resulting tool running and one, which he shared with me, displaying whatever evidence and case information I would need to see. I had the court list on a mobile phone and the Legal Adviser on my laptop. I clicked between him and Sentencing Guidelines. It took more technology than usual, and some effort and increased concentration to move between everything.

We were slightly slower than usual but we finished a list of 60 matters in exactly two hours, as hoped. Of course, as normal, some matters could not be dealt with; those pleading not guilty will have to come to court, as will ‘totters’ (those reaching 12 points) for the consideration of disqualification. But it still felt like a decent number to remove from the backlog.

The Legal Advisers, I am told, are pleased to be addressing the build up of traffic cases and to be busy while keeping safe. My experience of remote working in SJP has been that it is not much different, albeit a little slower and a little more demanding. Just two hours was quite tiring, and I would have preferred to be in a court building, but at least we are keeping going in the face of these unprecedented challenges and doing what we can to give drivers clarity on the state of their licence and protecting other road users.

None of this would have been possible without the hard work of many people within the justice system, and, particularly during my stint, a typically excellent Legal Advisor. Sitting as a Magistrate is always a privilege but perhaps never more so than now when so many are working so hard to keep our justice system going.