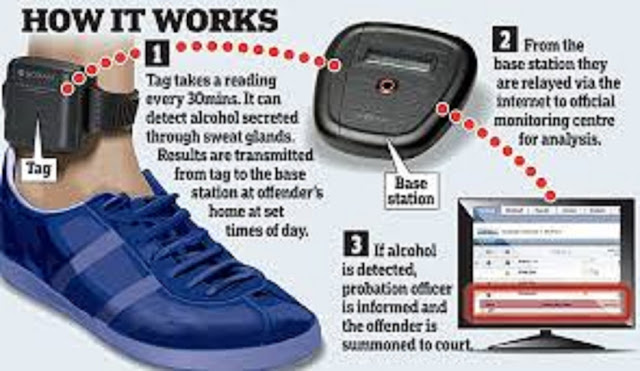 It has been variously estimated that around 70% of all crime is alcohol or drug related. Where alcohol has been indirectly related to a violent criminal event and not the principal offence in itself 39% has been the figure estimated.  These numbers are well known to all those involved in the legal system.  Curfews, overnight detentions, fines and occasionally imprisonment have failed to control the problem.  Those alcoholics with means can avail themselves of many medical and pseudo medical practices privately but they are a minority.  Today the government announced its latest initiative to get a grip of this problem; alcohol sensitive tags which measure alcohol in sweat  to be worn around the ankle.

The results of the two pilots seem too good to be true. It seems to me that the counselling throughout the required period of use and the actions taken when breach is suspected will make or break this scheme. There is no mention in the press release of the probation service whose officers will be at the so called coal face in the supervision of these offenders and who will be responsible for bringing such offenders who breach  to court.  I certainly hope for the best but fear that this innovation will take its place with so many others where implementation has been ineffective for one reason or another.