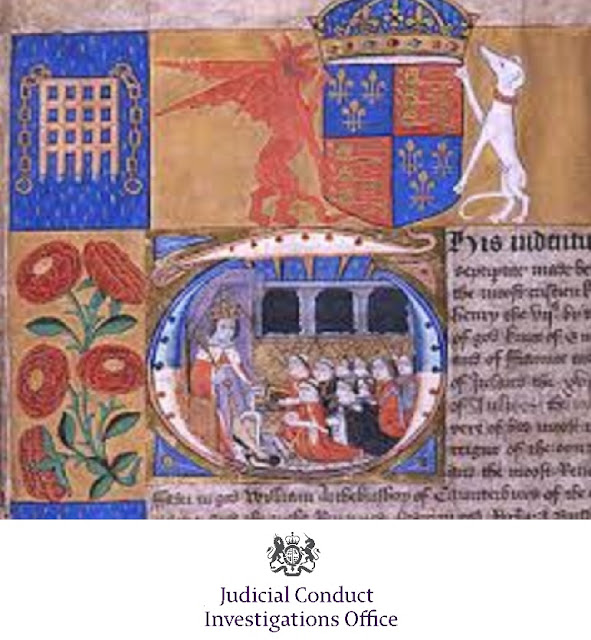 A decade or so ago a regular annual check on the judiciary regulatory body website now the Judicial Conduct  Investigations Office would have revealed decisions for about two dozen magistrates whose actions, speech and/or behaviour had fallen foul of the content of one or more of the 20 pages comprising The Judicial Conduct (Magistrates) Rules [available on line as a pdf file].  This year to date nine such JPs have had the ignominy of their case details published on line albeit in a highly abbreviated form. All such cases at the JCIO have the minimum of details published.  Indeed the whole process from initial inquiries to final decision is about as straightforward as the maze at Hampton Court. It is shrouded in secrecy behind the apparent clarity of the 20 pages of directions and procedures to be followed. Of the aforementioned nine, three magistrates were sacked owing to their failure to sit the minimum number of times required; viz. 13 half days annually.  I have always felt little sympathy for such people. They knew what they had signed up for and they could have discussed their time allocation problems with their bench chairman and/or Deputy Justices Clerk.  Of course the simple answer is that they might have signed up for the supposed kudos of being on the bench.

Austin Molloy has been issued "with a formal warning after he attempted to solicit support from other members of the bench against a fellow magistrate who had made a complaint against him”. Such a bland statement tells us almost nothing.  From my own experiences I know very well the vicious backbiting that takes place in and out of the retiring room.

Paul Latham received a formal warning when a "disciplinary investigation found that he had failed to inform his bench chairman and justices’ clerk that he was a witness in a case due to be heard on the same bench."  I find this extraordinary. A person supposedly chosen for the bench for inter alia having sound judgement being so foolish as to behave in this fashion seems lucky to be still in post.

Krishna Patel appears to have been treated very sympathetically. I cannot recollect over the years of having heard of a similar situation but then again the whole process is shrouded in secrecy. She was issued with "formal advice after she failed to meet the minimum sitting requirements for two successive years". (my bold).

Stuart Merrey was issued a "warning for improperly referring to his judicial status when providing a reference for another individual". This is perhaps of all the recent decisions listed here the one with which I most disagree. Many if not all my readers will at some time  have offered references on behalf of family, friends or colleagues.  The recipient of such references will judge their value depending upon the status in whatever form of the referee and his/her knowledge of the referenced person`s ability to fulfil the envisaged role on offer.  It seems to me perfectly reasonable that a respected JP should use that position on such an occasion in addition to or in place of any other qualifications s/he might have.

David Senior received "formal advice for an ageist comment he made to a colleague and remarks he made in an email to his bench chairman". Perhaps he didn`t realise that the magistracy is about the most political correct institution in the land.

Howard Tate received a formal warning because  "whilst hearing a case in open court  he had used his personal phone to speak twice to a defendant who had not attended the hearing. He also made comments about his actions to colleagues which were not appropriate in tone". (my bold). As per Paul Latham above such a foolish action belies his appointment as a JP.

All major professions have disciplinary procedures; most are available for the public to read. Many have the investigative process totally separate from the judicial process. And most allow representation of the accused if s/he so wishes at many or all stages. The JCIO is a star chamber. It is an anachronism in this age of instant and live communication of major institutions.  It is an afront to justice being done and being seen to be done.  It must be reformed.