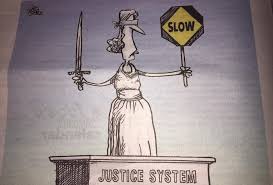 Historians or perhaps pedants will wax loudly that the history of trial by jury in England goes back to Magna Carta in 1215 which I suppose has some basis in fact if one is referring to the trial of lords and nobles of the realm. So: a very brief history....... For the common man or woman no such justice was available; a bench of magistrates consisting mainly of local landowners and/or power brokers was the seat of justice with considerable sentencing options; although the most serious offences of the day were sent to Assize Courts. Up to the middle of the 19th century JPs could sentence offenders to hanging. They could also sentence to transportation to North America and the Caribbean, to whipping and the stocks and to fines. Needless to say these benches consisted  of men only. It was in 1920 in the aftermath to the Great War that women became eligible for juries. The acts of 1825 laid down the following qualifications for jury service. In England and Wales they were  that a juror should possess an income of £10 a year from real estate or rent charge or £20 a year from leasehold of not less than twenty-one years or secondly should be a householder living in premises which were rated no less than £20 a year or in Middlesex and the County of London specifically with a rateable value of not less than £30 a year or thirdly should occupy a house containing no fewer than 15 windows. It wasn`t until 1962 that the property requirement was abolished. There are specific rules where trials without juries are the norm but that fact is of no concern in this instance. This post is concerned with the current situation as it affects trials in the crown court where the normal jury consists of twelve and where in the first instance a unanimous verdict is required reducing to 10/2 if so judicially directed.

Owing to the current crisis over corona where crown  court trial timetables have disintegrated on top of ever increasing delays  because of court closures and reduced judicial sitting times there is a backlog of 41,000 trals with an estimated five year time period for clearance. This is intolerable.  To expect witnesses to give evidence of events five years in the past is recognised by all involved as ridiculous and a real threat to justice being done and being seen to be done. The lord chief justice Lord Burnett has mooted that trial without jury must be an option when considering how to reduce the backlog.  This idea has had a  mixed response with some QCs for and some against with a similar divide amongst other legal professionals. My opinion for what it`s worth has been made here more than once; to expedite matters a judge of the crown court should be enabled to sit with two chairman  magistrates who have been approved and have experience of sitting with a judge on appeals to the crown court by offenders arguing their conviction at the lower court.  There are those who would argue that the judge would overwhelm those JP assessors but my personal experience negates that apprehension. Many former colleagues as well as myself were and are  impressed with the inquiring and respectful approach of crown court judges when discussing facts of an appeal. As a plaintiff at a tribunal appeal I personally was a plaintiff facing a bench of a high court judge and two unrobed assessors.  If a high court judge can have his/her interpretation of the facts open to discussion so can a crown court judge.  Indeed the finding of fact would be the only task of the JPs; all other processes would of course remain with the judge.

I cannot for one moment believe that the current delays will be allowed to continue. The MOJ will not relieve the list by allowing magistrates courts to have increased sentencing powers.  It is highly unlikely that some or any either way offences will become summary offences and no either way offences will have the defendants` right to choose removed. So there is a simple choice facing the Lord Chancellor to reduce the stain on justice of delay; judge only trials or judge plus two suitably qualified magistrates.