MINISTRY OF JUSTICE IN ITS BUBBLE JUST KEEPS ON WOBBLING ALONG 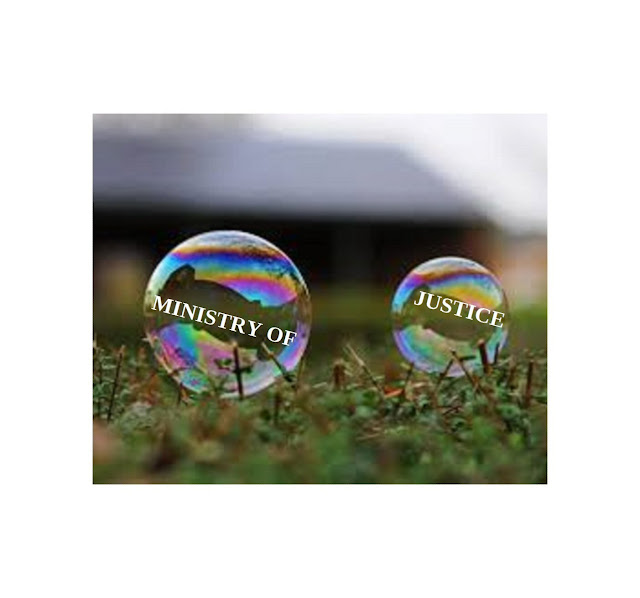 On 22nd June I mused on judge only trials at crown court. This possibility in my opinion was based on the chaos in scheduling trials in crown courts owing to the close down caused by Convid 19. It would appear that there are about 30,000 trials awaiting a court date. Since crown courts re-opened about ten weeks ago only 250 trials have been heard in England and Wales.The delays are such that already a suspected drug dealer was ordered by HH Judge Keith Raynor to be released from prison where he had been on remand because next year was the soonest a court date could be found. The demands on space in the courts which are functioning are causing some anxiety as to possible communication and consequent jury tampering owing to the proximity of jurors to the defendants in the dock.  Indeed recently at one of the most high profile trials in recent years; that of those accused of killing PC Andrew Harper, a juror was dismissed after she was heard discussing matters with the defendants. The country`s most prominent retired judge, Lord Phillips of Worth Matravers, a former lord chief justice and first president of the Supreme Court, said that judge only trials should be employed with a defendant`s agreement to avoid waiting possibly years for a jury trial. I won`t repeat here my arguments as per the post of 22nd June as above except to emphasise if the need arises  with the addition of two qualified magistrates on the bench justice would not only be done it would be seen to be done and isn`t that argument often put forward by those screaming DIVERSITY, DIVERSITY AND MORE DIVERSITY; an argument that usually brooks no opposition.

Yesterday the Ministry of Justice announced that vulnerable victims (I note that the press release fails to use the correct expression for such a witness during trial which is (complainant) would be able to avoid giving their evidence in an actual courtroom by having it pre recorded. Nowhere is it mentioned that defence lawyer would be able to undertake similarly a cross examination.  Perhaps a reader will advise if this was a deliberate omission.

Some time after my leaving the bench directions were issued by HMCTS that defendants must be required to state their nationality by way of the activation of section 162 of the Policing and Crime Act 2017. I did not and do not consider this requirement an infringement of rights or in any way unfair practice to defendants. A full post on the topic from 16th November 2017 is available here.   Earlier this month that requirement was ended. I quote from the Law Gazette of 4th August:-

"Senior judges and lawyers told ministers that collecting nationality information at the start of criminal cases breached privacy laws. Only defendants who are convicted and given a prison sentence will now be asked to give their nationality, for the purpose of possible deportation.

Theresa May’s government introduced the controversial policy, in section 162 of the Policing and Crime Act 2017, as part of its ’hostile environment’ regime, with the aim of speeding up the removal of foreign criminals. It came into force only a few months after a report by David Lammy, now shadow justice secretary, highlighted racial bias in the criminal justice system.

Civil liberties campaigners had condemned the move for ’bringing border controls into our courtrooms’. In May, a report from the non-profit criminal law firm Commons said the policy ’racialised’ the courts and undermined the impartiality of the criminal justice system.

The report revealed that 96% of legal practitioners surveyed did not support the policy, while 90% felt it had a negative impact on perceptions of fairness.

It also found that district judges, magistrates and legal advisers were often embarrassed to ask the question, which many defendants did not understand, and conflated nationality with race or ethnicity. The policy was not implemented consistently, with white defendants less likely to be asked for their nationality.

HM Courts & Tribunals Service emailed magistrates telling them to stop their legal advisers asking defendants their nationality ’with immediate effect’. This followed a decision by the Criminal Procedure Rule Committee, which is chaired by lord chief justice Lord Burnett of Maldon, that the collection of nationality information by the courts at the beginning of a case did not comply with the Data Protection Act 2018, as the detail was not necessary at that stage."

I remain of the opinion that this further example of  the letter of the law vanquishing its spirit will ruin us all.

Another U Turn from this government in its sub division aka Ministry of Justice is the need or not to wear masks in court. It was reported on 14th July that masks were not necessary in the confines of the courtroom. However just ten days later on 24th July our wise and erudite at the time, mistress of HMCTS, had a change of mind:masks were to be compulsory.  The continuing evidence that this government just has no idea how to react to all the vagaries associated with Convid 19  is becoming a joke if it were not for the loss of life and hundreds of billions of pounds being thrown its way. How can any right thinking person have confidence in these people?

Only a few days ago it was quietly announced that the CEO of HMCTS had left her post to be replaced by her deputy. She has been seconded to the Department of Education. Changing horses in mid stream of this crisis seems a misplaced response but currently hardly a day goes by without such folly. Perhaps that`s why the Education Secretary is still in office and Susan Acland-Hood is being prepared to take over as his permanent secretary: I can`t think of any other reason for her mishaps at MOJ to be transferred.  Keep it in the family.