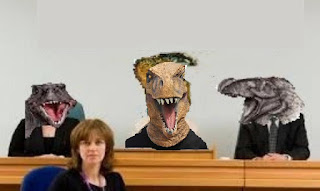 Those who spend several of their precious minutes reading this blog obviously have more than an average interest in the law, lawyers, magistrates` affairs and other associated practitioners within all the permutations of what is still known as our justice system.   It would then be no surprise that some or many of you will have read on social media and in myriad local print media that the Ministry of Justice is advertising for magistrates. Ten years ago when there were about 30K magistrates servicing about 300 courts that would have caused headlines in those self same media.  Today with the number of courts literally halved, the number of magistrates has reduced by 57%. In 2013 there were 149 District Judges (MC) and DDJs. Currently there are 207 i.e. about one for every magistrates court; double the ratio as in 2013. In the ads however, applications are requested thus, "If you're aged 18-70 & can offer 14 or more days a year, we want to hear from you! Full training is provided." This ridiculously misleading advertisement has been running more or less unaltered for some months when today the  Bill to amend section 13 of the Courts Act 2003 to change the retirement age for magistrates from 70 to 75; and for connected purposes has yet to pass through all necessary parliamentary stages to be enacted.  And even supposing it does eventually reach the statute book it is a sure bet that nobody will be appointed to the bench at the age of 70. Its purpose is to persuade existing magistrates to remain in office for an additional time to cover the self inflicted shortfall which now exists. Having myself retired somewhat prematurely five years ago some little time prior to the imposition of the Criminal Courts Charge, dreamt up by the most incompetent Lord Chancellor in living memory, because I did not want to be forced to make the appropriate pronouncement enabled by the Charge I have lately pondered whether if I were five years younger five more years, to coin a phrase, would have been welcome. At the time perhaps;  but in the current climate I would have been well satisfied with my seventeen years as a J.P. to retire at 70.  And then I ask myself why.  The answer is that there is now no certainty of every defendant receiving true justice. Identity politics and cultural attitudes fostered in the main by political big wigs and enhanced by self identifying social groupings to advance their own agendas of division and discord, have fostered a doubt in many sectors of the population that the "system" is biased in the courts as in many other aspects of our social system. Governments, especially since 2010, have without a shadow of doubt advanced that impression by their making it increasingly difficult for an average wage earner to have legal representation in a courtroom. They have used a classic military pincer movement on the one hand in depriving the legal profession especially young criminal lawyers of fees worthy of their labour and on the other simultaneously raising the financial threshold of legal aid eligibility to deprive those on low and even median incomes of the right to legal aid. The result is that many, nobody knows just how many, defendants have pleaded guilty to offences to get matters over and done with at minimum cost bearing in mind sentence reduction for early guilty plea. The onset of the single justice procedure in 2015 which my early retirement allowed me to forego is used for adult defendants accused of minor offences that cannot result in a prison sentence such as speeding, driving without insurance, TV license evasion and train fare evasion.  I would not have wanted to be part of such a process.  It is another nail in the coffin of "open" justice. It is conducted by post in a closed office not open to public scrutiny whatever the supposed safeguards the MOJ insists are in place.  And finally in my humble opinion the question of "diversity" on the bench.  For decades the minimum age of magistrates was 27 but in 2004 that was reduced to 18.  At that age it has been shown conclusively that the parts of the brain dealing with logical thinking processes are as yet not fully developed. Indeed until the mid twenties emotional responses are not fully controlled. My observations on this on Twitter were met by abuse. Thankfully as far as I am aware in my own bench the youngest appointees were mid twenties. But that age limit combined with strident but misguided and wholly  wrong cries to increase the diversity of the bench have finally exposed the concept of a political  junior judiciary: a concept we are witnessing right now in the appointment of a new Supreme Court Justice in the USA when politicians and senior judiciary are nodding to themselves that that does not and will not happen here.  How wrong and hypocritical they all are.  For the record the BAME population of the WHOLE UK not just England & Wales where magistrates operate is 13.8% and the ratio of BAME magistrates is 13%. But misinformation is a virus and like a virus it spreads.   The item below was posted on Twitter on October 4th.  The word to note is the very first; an innocuous "Just". Bearing in mind the statistics in my previous sentence the tweet is designed to have an effect known to its author ie to spread discontent amongst said communities and thus to increase disharmony.  It is nothing short of disgraceful for the Magistrates Association to be involved. 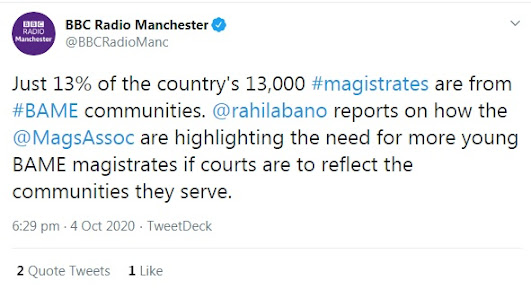 The phrase "to reflect" is a cover for there to be a political aspect to the composition of the bench. This is not something new. When I applied for the bench in the late 90s a question on the application demanded to know for which political party I had voted in the previous general election. I left it blank only to be told shortly afterwards that if I did not answer the question my application would be immediately rejected. I complied. The removal of that question was one of de-politicising the bench which previously had offered the position to former or current mayors or trade union officials in the "buggins turn" attitude to service as a magistrate. We are now in a reversed position. There is an unsaid or unwritten new rule of "quota" for those supposedly unrepresented minorities members of which will not know if they are selected on merit or bridging a supposed deficiency in their race, gender or what have you representation on the bench.


This is just a brief summation of why I would not have extended my time on the bench were it offered now. Perhaps I might be thought of as a reactionary old dinosaur. I most certainly am not but unfortunately age and life experience are of no value to the chattering, self important, socially divisive, politically correct identity politics and practitioners of 2020.