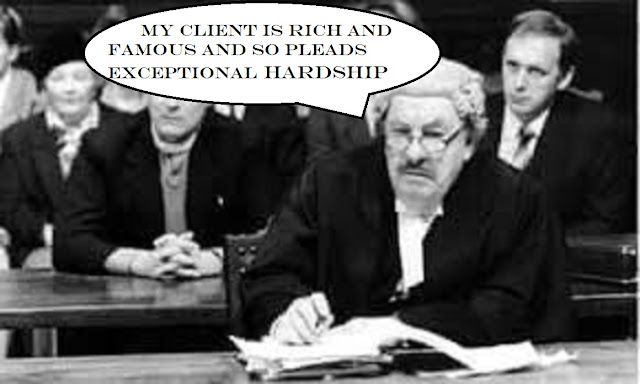 It is often the case that usually law abiding citizens` contacts with police and the laws they enforce is at the wheel of a vehicle. Speeding on motorways used to be among the most common offences but since the decimation of police numbers and the consequent reduction in motorway patrols that number has reached a plateau or in other words many motorway speeders are getting away with it if they can avoid the cameras. Mobile phone use whilst driving in the last decade or so has been rising with increasing penalties for those apprehended. The numbers of those caught driving without insurance has fallen from 208,384 offences in 2007 to 92,343 in 2017. These offences and others attract penalty points and 12 penalty points attract disqualification or so the story goes.  Why is it then that latest enquiries show that 9349 drivers are still legally on the road with 12 or more penalty points on their license?  And the answer is exceptional hardship. At no time during my appointment was any advice on that subject or training by any body or authority given to my bench. Indeed I compiled my own advice sheets on the topic for which very many colleagues requested copies. I don`t propose to go into  the whys whens and wherefores (sic) of this subject. It has been a topic here quite often over the years of this blog. Type those two words in the search box for historical posts.  Readers will notice that I am generally of the opinion that benches have been too easily swayed by highly paid lawyers (they have to make up lost legal aid income somehow) into the acceptance of the exceptional hardship argument which is based on the civil standard.  Indeed put these same two words in Google search and you will find many dozens of legal firms offering their services to those who find themselves one penalty point too many on their license. It is difficult for all but the most eloquent offenders to argue their own case. However all this whilst not quite coming to an end is certainly going to be made more awkward and rightly so for offenders. Every magistrate has listened with patience to exaggerated  if not downright untruthful statements on behalf of these offenders; from the £6,000 salary a month of a managing director who denied or rather whose lawyer on his behalf denied that his client could be equally well served by employing a driver to the self employed businessman for whom I personally with my bench adjourned a case to bring his tax return to court showing, he claimed, he was earning below average wages with a large family to support; lies of course. I often had to educate my junior wingers of various precedents and the requirements needed for an offender to successfully argue a case.  Indeed more than once I had to ask a sympathetic but interfering legal advisor to refrain from putting her sympathetic opinion to us unasked.  It is therefore very welcome  after what the Sunday Times a decade or more ago  described if I remember correctly as the scandal of drivers legally still at the wheel with 12 or more penalty points that this "loophole" is to be tightened.  Drivers` reasons  will no longer be taken on trust even although they will have been sworn in before giving evidence, an outdated requirement in my opinion in a country where half or more people do not believe in an almighty being. Losing employment or caring for a relative are probably the most common reasons given in applications to justify exemption from a ban. After consultation the Sentencing Council has stated that it was "for the offender to prove to the civil standard of proof" that a ban would cause exceptional hardship. The statement added that losing work should be treated as "an inevitable consequence of a ban" and that perjury could result from making a false statement that consequence being a paper tiger insofar as magistrates` courts workings are not officially recorded.  I suppose the best summing up I can make of all this is not before time but not enough.