ILLEGAL MIGRATION AND PRISONER REPATRIATION; IS THERE A SOLUTION? 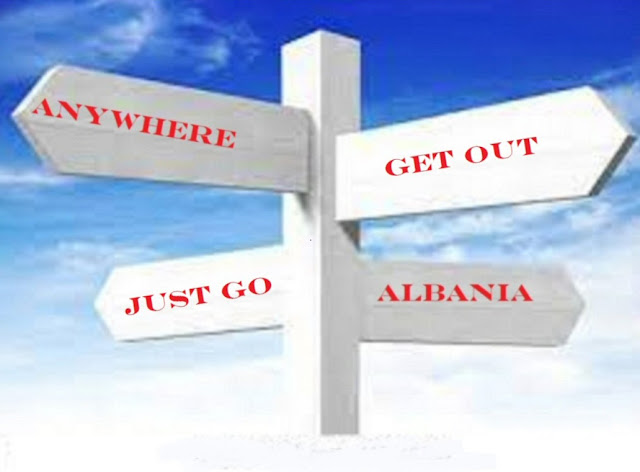 It seems we have become accustomed every week of every summer to reading of the increased number of  individuals being assisted ashore on the south coast from a variety of flimsy often unseaworthy inflatable craft more suitable for cruising down a rural river than crossing the 22 miles of rough sea from the French coast.  For the last decade the Home Office, an institution described by John Reid a previous Home Secretary as not fit for service, has been unable to institute viable policies to control this illegal immigration. Indeed it is arguable that this failure alone contributed to the success of the Leave campaign. How foolish was the public to believe that outside the EU we would have more power to halt this influx than inside but that is another story.  Recently the Home Secretary has produced yet more legislation to try to control the masses fleeing war in the Middle East and Africa. Short of ramming these craft there is little doubt that whilst there are migrants with cash and gangs with little fear of detection and retribution this latest attempt to stop the flow will prove as futile as the previous ones.

Whilst the Home Office is wallowing in its own disfunction the result of the criminal activities of those  foreigners whether legally or illegally in this country is almost as chaotic as the Ministry of Justice then becomes involved.  Of its 77K workers the press office of that department of state must be among the largest in Whitehall. Rarely ten days pass without an announcement of further good intentions. The latest such offering is available here.  Is there anyone reading this who does not know that beginning 2010 with 23.8% sliced from its budget that the MOJ has been starved of enough funds so much so that law `n order by any interpretation has been financially butchered from the numbers of police to the failure of the prison system with courts, legal aid and probation falling by the wayside. That recent statement above from the Secretary of State refers mainly to the probation and prison services both of which were mangled beyond belief by the worst, most inept cabinet minister in post war history half a decade ago. When it comes to return of foreign prisoners to their countries of origin it seems the two departments of state collide.  The latest document i.e. the rule book from the National Offender Management Service is available here. Personally I recollect a single occasion when unusually an offender had in my opinion transgressed such that he was eligible to be deported.  The official channels through which we as a bench made the information as appropriate  blocked us at every turn. On 26th July with more fanfare from the MOJ a statement on the return of Albanian prisoners was released. It remains to be seen how effective is this agreement.  Current figures for Albanians and others returned from British prisons are below. 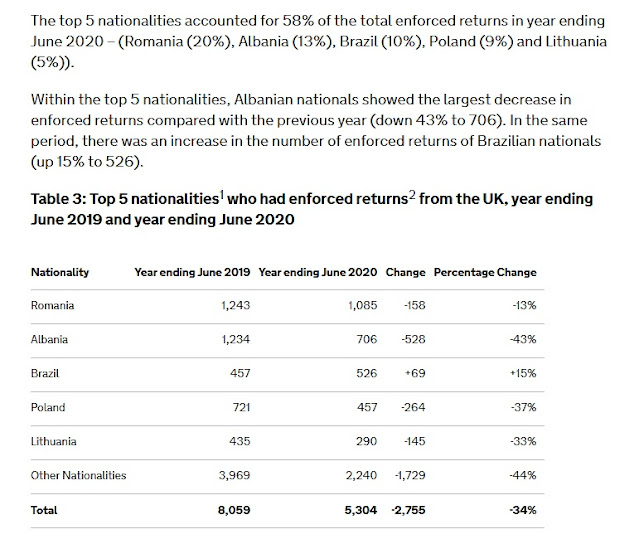 There is no doubt that there are considerable obstacles to be overcome when this task is to be considered however much the Daily Mail seeks to blow the MOJ trumpet.  Here is a brief summary.  Considering the government`s record I don`t think we should be too hopeful.

https://www.gov.uk/government/publications/immigration-enforcement-data-august-2020 (Table FNO_09 in Transparency data Immigration Enforcement data: August 2020, provides the numbers of foreign nationals removed under the Early Removal Scheme every year since 2010 but that there is no published data that breaks down these numbers by nationality or offence type).

All five prisoners repatriated under the EUPTFD were EEA nationals.

Climate change and the millions of people being forcibly displaced by warring factions are certain to further increase the pressures on western societies from legal and illegal migrants seeking a peaceful and economically better life.  This country`s problems are the world`s in microcosm. From Arizona to Antalya the trouble is not going to go away.  The test for us is how to handle it.

Murder of prisoner at HMP Wandsworth ukcri.me/62067 Posted on 04th May 2015
Man charged after attack on female prisoner custody office ukcri.me/62522 Posted on 30th June 2015
Murder investigation underway after death of a prisoner at HMP Altcourse Posted on 14th November 2014
MAC report sets the record straight on migration + Juncker would let Britain take back powers while staying in EU Posted on 09th July 2014
From The Saloon Bar Posted on 06th May 2014
See how YOU like it! Posted on 01st September 2011
â€˜eâ€™ petitions explained, (sort of). Posted on 22nd January 2012
Room Service? â€“ A new meaning for the term â€˜cell phoneâ€™.. Posted on 02nd March 2013
Life sentence prisoner Paul Oddysses on the run from Hollesley Bay open prison Posted on 24th May 2014
Third Prisoner in week absconds from Hollesley Bay Posted on 25th May 2014