FROM GIN LANE BY HOGARTH TO PRITI PATEL AT HOME OFFICE 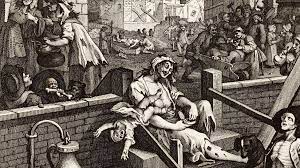 Alcohol has been around almost as long as human civilisation.  Humans invented alcohol many times independently. The oldest booze dates to 7,000 BC in China. Wine was fermented in the Caucasus in 6,000 BC; Sumerians brewed beer in 3,000 BC.  For most people it has been an easy but increasingly expensive method of inducing conviviality and relaxation when partaken in company of others.  It has also been a source of being able to escape the stresses of life ancient and modern.  Hogarth`s cartoon of "Gin Lane" 1751  is still relevant insofar as the wealthy in a population can do their binge drinking often behind closed or private doors and be sent to rehab clinics when their colleagues and/or families consider that their excesses are a danger to themselves and their finances in one form or another. Just as it is the rich wot gets the pleasure and the poor wot gets the blame  it is those low down in the social pecking order who are often before the courts and for them the term rehabilitation is more often than not merely a literary term in a probation report. I have long argued here that addicted habitual offenders should enter a medical pathway and not a legal one unless the level of criminality is such that other factors must be jointly considered.  I have used the term "workhouse" a search of which in the search box will explain for those interested my opinion in detail.  For the record it is widely assessed that alcohol is involved in around 40% of all violent crime.
However we all know that there is considerable social disturbance which is related to excessive alcohol consumption and that that disturbance often is unrecorded officially but a blot on the lives of all those involved.  Our justice system is not just ill equipped to deal with addicts` criminality; it is demonstrated at almost every magistrates court every day.  This example at a crown court is typical.  Police, probation and prison have been, are and will be expected to "do something" for this person but  know full well all that will be done is to contain her.  It is indeed a disgrace that government allows this legal carbuncle to fester.

Human beings are imperfect creatures and judges are human beings.  When doctors make decisions which are detrimental to a patient there are avenues of redress often officially impeded for those who survive the unfortunate episode.  For judges there is the shadow of much reduced local court reporting for their sentencing eccentricities to be overlooked but alas for  Judge Timothy Spencer the outcome of this case proved disastrous.  Referred by the Attorney General to the appeal court the offender received a sentence more consistent with his crime. In the hush hush world of judicial investigations it is unlikely we will hear what if any sanction was applied to his honour.

When a magistrates court disqualifies a driver it is incumbent upon it to make reasonable effort in advance to advise the miscreant of that intended action the reason being obvious; to prevent that offender unknowingly re-offending.  In the matter of stripping a person of his/her citizenship it is obvious to all but the deaf, dumb and blind that that intention be brought to the attention of the intended recipient of being stateless.To that list of exempt parties  should have been added the Home Office the actions of which have been ruled unlawful by the Court of Appeal in the case of a woman known as D4 living in a camp in Syria. Truly this department of government is itself becoming even more of a law unto itself since a previous Home Secretary, Lord Reid, described it in 2006 as "not fit for purpose".

On the face of it an uninsured driver with 17 penalty points convicted of death by careless driving deserves an immediate custodial sentence even if only for four months. With very limited reporting of this case reasoned criticism is limited but an understanding of the deceased`s family`s incomprehension at apparent leniency is not difficult.

Sending racist messages over the airwaves is covered by various communication acts but along with readers I have seen much worse on social media.  Work is in progress at the aforementioned Home Office to attend to this discrepancy.  A difficult line between free speech and hate speech needs a King Solomon to adjudicate.  We have Priti Patel.