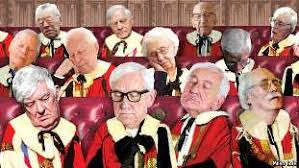 The House of Commons is arguably overloaded with MPs.  Such a statement will have many antagonists who might just have a case to answer.  However there is no doubt that the House of Lords is an anachronism where in the main almost 900 self satisfied has beens are paid £323 to turn up, sign the register and f*** off to their favourite drinking haunts. From time to time they might waste £410 of our tax money to ask pointless questions in their chamber.  It doesn`t occurr to many that perhaps five minutes or less with Mr Google or reference to the appropriate Lords library will elicit their  required information which is generally already in the public domain.


Step forward Lord Jones; aka Baron Jones whose greatest political achievement was as a parliamentary under-secretary of state for Wales from 1974 to 1979.  He was the Member of Parliament (MP) for East Flintshire from 1970 to 1983. In 1994, Jones was appointed by the Prime Minister as a member of the then new Intelligence and Security Committee, on which he served until 2001 when the Committee was dissolved at that year's general election. Jones retired from the House of Commons and was made a life peer with the title Baron Jones, of Deeside in the County of Clwyd. Such an outstanding career to be appointed to the sinecure he now occupies.  Having become used to spending our tax money yesterday March 10th he asked a written question in the House at a cost of £149 the answer to which any political aware person would have known immediately;

" To ask Her Majesty's Government what steps they are taking to support the recruitment of more magistrates to the bench?" to which the answer was:-

"Lord Wolfson of Tredegar The Parliamentary Under-Secretary of State for Justice
The recruitment of more magistrates is the Government’s top priority for the magistracy. The MoJ is investing £1 million this financial year into a programme of work to improve magistrates’ recruitment. A digitised and more inclusive recruitment process which will improve data collation was launched in January, alongside an inclusive marketing strategy which aims to targets a wider, more diverse audience, attract more applicants and recruit more from under-represented groups. Additionally, we are legislating to increasing the judicial mandatory retirement age to 75. This will retain around 400 judges and 2,000 magistrates more annually, when compared to retaining the current age of 70."

Abolish this talking shop NOW! These has been layabouts have had their day.