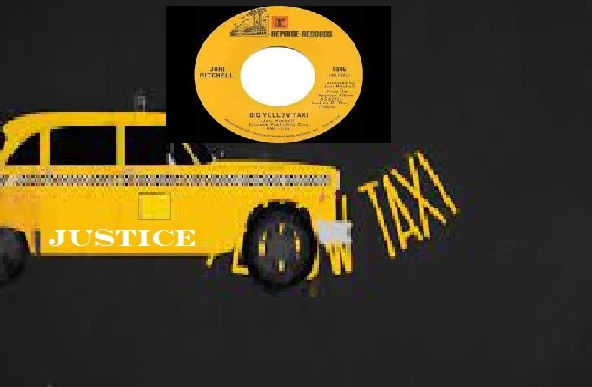 Without the rule of law a society cannot exist as such.  The law might be unjust or weighted to suit particular interests or political factions but it must exist in practice or the only law which will be in place will be the law of the jungle.  I suppose as a rough guide a primative legal system emerged in England with the establishment of farming communities about 2000 BC although about 8000 years earlier in the Middle East hunter gatherers began the process of civilisation we know today. A few hundred years before Mosaic law was offered to the children of Israel the Babylonian Hammurabi issued the Code of Hammurabi which he claimed to have received from Shamash the Babylonian god of justice. Unlike earlier Sumerian law codes such as the Code of Ur-Nammu, which had focused on compensating the victim of the crime the Law of Hammurabi was one of the first law codes to place greater emphasis on the physical punishment of the perpetrator. It prescribed specific penalties for each crime and is among the first codes to establish the presumption of innocence. Although its penalties are extremely harsh by modern standards, they were intended to limit what a wronged person was permitted to do in retribution. The Code of Hammurabi and the Law of Moses in the Torah contain numerous similarities. For law in general or laws in particular to be respected by a population they must be simple to accept and understand.  Indeed we are all aware of the old adage attributed to Thomas Jefferson;   “Ignorance of the law is no excuse in any country. If it were, the laws would lose their effect, because it can always be pretended.”  But if simplicity in the eyes of the public is a necessity for "good" law it appears that as society has developed in ways unimaginable just a century ago that simplicity has all but disappeared and those who are charged with administering law and justice from parliament to the court are like sailors of old without a compass and only the stars as a guide. Indeed the changes and complexity of sentencing I personally experienced when active in the magistrates court are but a childhood game of snakes and ladders compared to the current sentencing guidelines at the crown court.


Recently 21 year old Nathan Fairhurst admitted possession of a bladed article in a public place.  All readers will have heard various Justice Secretaries over the years preaching that such activity must be punished by a custodial sentence. Twenty years ago before sentencing guidelines were mandatory judges (and magistrates too when appropriate) would use a structured sentencing outline  and their own initiative and experience to sentence. Nowadays they must follow Sentencing Guidelines or explain their failure to so do.  The complexity of Guidelines is obvious. It was the US state of Michigan around a decade and a half ago which originated the idea of a formulated almost mathematical chart to aid sentencing.  Current practice in  England would seem now to be antiquated and could be replaced by algorithims as so many other aspects of our society are.

With Justice Secretaries coming in and going out like commuter trains another common theme is the numbers of foreigners in our jails and the numbers expelled on completion of their sentences.  There are about 10,000 foreign nationals or about 11% of the total prison population. Under Section 32 of the UK Borders Act of 2007, non-EU “foreign criminals” sentenced to 12 months or more in prison are subject to automatic deportation. 4,700 foreign national offenders were removed in the year to March 2020. The number of such returns fell from 6,200 in 2016. Of course there is the ongoing scandal of those who evade deportation after completing their sentence as the chart below idicates. 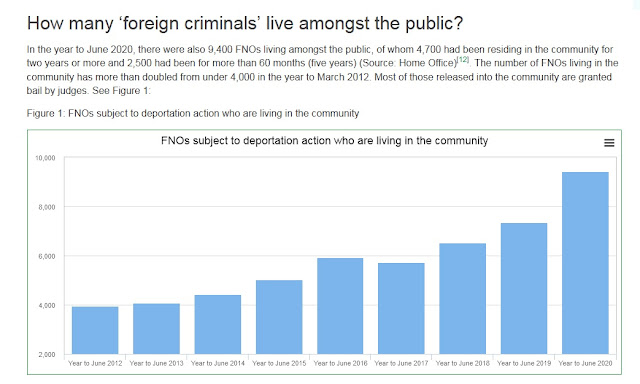 So when we read that Palfi Csaba Hungarian hard man will be deported we can only hope and not assume that the order will be carried out. The problem is that nobody cares about justice and the rule of law.  Of course legal bigwigs and government toadies will talk the back legs of donkeys to justify their support for the current legal fashion. Where was all the support for justice locally since 2010?  Now MPs are complaining that around half of all constituencies have no local court.  There was little opposition when the courts were being closed.  Now they wail and bemoan the loss.


Oh, bop, bop, bop
Oh, bop, bop, bop
They took all the trees, and put em in a tree museum
And they charged the people a dollar and a half to see them
No, no, no
Don't it always seem to go
That you don't know what you got 'til it's gone
They paved paradise, and put up a parking lot