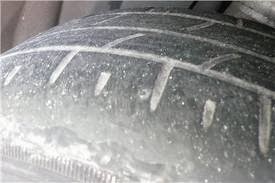 One of the more undignified situations which can befall us in the winter months is to slip on an icy patch of pavement or road; if the latter a lack of dignity is the least of the possible outcomes.  Those few square inches of leather or rubber on the soles of our feet just did not have sufficient friction to prevent our losing balance.  It is incredible to consider that about the same such area is the area a tyre has in contact with a road surface. All that steering and braking technology has zero value if the tyre behaves as our footwear on that icy street.
Apparently over 87% of the 10,228 prosecutions for defective tyres last year were proved.  My personal experience of such cases is that other charges are often brought in addition.  Rarely is the maximum fine of Â£2,500 imposed but the three penalty points are mandatory and can lead unsuspecting drivers to the totting limit of twelve.  Considering that the cost of tyres, economy brands included, is so relatively low the price for neglect in this regard can be extremely high in every meaning of that word especially when considered as an aggravating circumstance in a more serious charge.