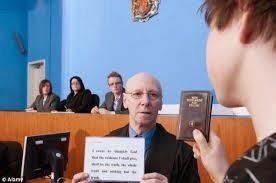 Unsurprisingly there has been only limited publicity in national media to a motion to be debated at the forthcoming Annual General Meeting of the Magistrates` Association. This event has historically been a talking shop for the small numbers attending and of little interest to anyone else.  However in the light of the momentous changes affecting magistrates  which have taken place since 2010, are in current progress  and/or are likely to be activated in the next few years, changes which affect the functioning of the courts through which over 90% of criminal cases begin and end,  some might consider that one of the two resolutions for debate ; â€œthis Annual General Meeting believes that the present oath and affirmation are no longer fit for purpose and should be replaced by the following: â€˜I promise very sincerely to tell the truth, the whole truth and nothing but the truth and I understand that, if I fail to do so, I will be committing an offence for which I will be punished and may be sent to prison.â€™   is a peripheral matter and not worthy of the time allocated for its discussion.
Witnesses in court currently are offered the opportunity to take the oath on an appropriate holy book or to affirm.  The wording of the former is, â€œI swear by .......... (according to religious belief) that the evidence I shall give shall be the truth the whole truth and nothing but the truthâ€.  Those who choose to affirm say, "I do solemnly, sincerely and truly declare and affirm that the evidence I shall give shall be the truth the whole truth and nothing but the truth."  In historical terms oath taking can be traced back to the Book of Genesis.  Virtually all ancient civilisations recognised the taking of an oath as the highest level that an individual could place upon the truthfulness of his words.  The Christian tradition from which current English court practice is derived originated at a time when the population believing in a literal translation of the Bible was in awe of the Church and the divine retribution for lying having taken the Lord`s name in vain.  There were notable exceptions particularly Quakers who to this day will affirm rather than swear.  Similar religious objections to swearing the oath are held by orthodox Jews.  The manner in which a witness is asked to swear or affirm is of some significance.  I have often heard a legal advisor say to a witness, â€œDo you want to swear on your holy book or affirm?â€  Other forms of approach are, â€œ Do you have a religion?â€  and variations thereof.   Unless the witness has a belief in divine retribution it seems to me that the oath indeed is superfluous even if it is followed by a warning of the consequences of lying.  From that point of view an affirmation to tell the truth is more realistic.  Over the years I have noticed that the majority of police officers declines the oath and affirms.  I would leave readers to make their own conclusions on that observation.  It is usually the case  that very rarely if ever does a witness who might be considered Muslim or ethnically of Arab heritage decline to swear on the Koran.  It seems that even when such witnesses in their evidence attest to behaviour forbidden by the Koran they have chosen not to affirm.  There are certain conclusions that might be drawn from this equivocal attitude to religious belief or lack of and not just by Muslims  that might be more suitable for another occasion by other commenters.
The threat of court proceedings in the event of a witness having been shown to be a liar  is  99% an empty threat.  In 2010 only three defendants of 37 charged were found guilty of perjury in a magistrates` court and one of those was given a conditional discharge.  That is the real situation of truth telling and lying in the lower court.
The taking of the oath has significance only to a small minority.  I therefore support the motion but wish the M.A. would have relegated it to a lower level of discussion and allowed more significant changes to our situation to be the subject of debate at the A.G.M.