MAGISTRATES` COURTS? YOU`RE HAVING A LAUGH 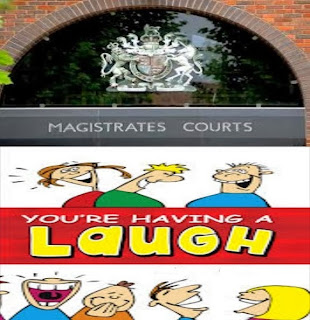 Compared to the situation twenty years ago magistrates retain little autonomy on the running of the courts named for them. There are of course minor variations across the country but the essence of the current situation is that we are treated by HMCTS as unpaid employees and that we are in a position where we must obey the dictates of Justices` Clerks some of whom, as senior civil servants, look upon their posts more as greasy poles at the top of which are some of the most powerful positions in the country.

The extent of this control was apparent to me recently.  A call came through to the retiring room about 1.45p.m. from a colleague due to sit in the afternoon.  She had been unable to speak to anyone in the justices` liaison office; the line had gone to voicemail since 1.00p.m. when she first rang. Her simple message was that a family emergency had required her attention and she would not be available as a chairman.  Discussing this with colleagues we quickly concluded a minor shift in the three afternoon benches` compositions ensuring that the usual preferencesâ€¦..gender and ethnicity were incorporated and informed the first of the legal advisors who appeared a few minutes later.  But, we were told, the situation had to go to the bench legal manager who would make the decision.  In due course he rubber stamped the situation.

And this is a simple example of how we are considered as unpaid employees.  We are empowered to deprive a person of his/her liberty for six months but considered unable, knowing the requirements which are desirable, to constitute a few courts in an emergency.

Magistrates` Courts?   You`re having a laugh.