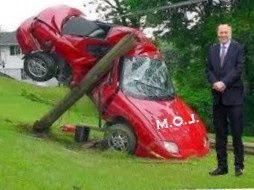 Until two or three years ago our court statistics were pinned up in the retiring room.  One day they were removed.  Our legal advisors appear to prioritise getting through a list as quickly as possible.  More than on just an odd occasion, in fact just last week, my bench insisted on a course of action that put the interests of justice as we understood the phrase ahead of  pleas by our L/A to change our minds so the list could be completed.  It was  no surprise to note the appropriate figures just released by the MOJ re the efficiency of the lower courts.
The first three quarters of this year showed there were 117,582 trials of which 52,783 were effective; ie 45%. What is equally interesting is that of the 20,467 ineffective trials (disregarding cracked and vacated trials) tardiness by the CPS or the inability of it to get its witnesses to court was responsible for 5,782 [28%] of those. In 281 instances the CPS prosecutor was engaged in another court and could not proceed with the listed trial.  Ineffective trials as a result of maladministration within the courts system, ie responsibility of HMCTS, numbered  5,733 [28%]   Annotated problems with defence lawyers and/or their clients were responsible for 5,374 ineffective trials.  Of course it must be borne in mind that the â€œdefenceâ€ figures are an amalgam of hundreds of disparate organisations none being a monolith like the CPS with a central administration.  Similar percentage figures for the whole of 2011 when the coalition had its feet firmly under the justice table were:-
Effective trials                                                            44%
Tardiness of CPS as above                                          28%
Maladministration by HMCTS                                    29%
I suppose the best gloss that can be put upon those numbers is that having decimated staff within the courts system and the CPS and thus reduced costs so we are led to believe, courts are not functioning any less efficiently than in 2011.  Of course this is based on the premise that a figure of 45% effectivity is success.  Apply that rationale to business or industry and we would all be in the poor house.  Perhaps somewhere in the bowels of Whitehall is a set of figures detailing the additional costs of rescheduling 56% of trials.
When a central pillar of our civilised society is being run like a clapped out old banger with odd tyres, barely functioning brakes and a driver with tunnel vision drunk on a power trip and what can we expect?