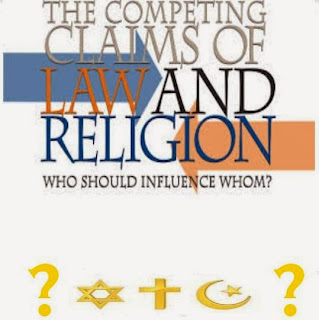 This country could a long time ago have been described as a â€œChristianâ€ country.  The sovereign was anointed with holy water and s/he was appointed by God to rule.  The national church is by definition â€œEnglishâ€.  It is fair to say that before the enlightenment the Hebrew Bible and its subsequent New Testaments were considered the natural (and only) way in which man`s moral behaviour could be judged.  There are still some who hold this belief that religious authority is the only basis for a system of civil and criminal law.  Indeed the last twenty years have seen direct collisions between them and a  humanist application of the law.  A population now containing 3 million Moslems the proportion of whom professes a desire for Sharia based governance is largely speculative owing to there being as yet no progressive or unorthodox religious derivatives as there are in Christianity and Judaism,  is  gradually changing the way in which religious belief in general is compatible with   a secular legal system operating for the most part on a secular basis.  Half a million Polish immigrants many of whom are practising Roman Catholics have encouraged some Christians to assert rights which have lain dormant for decades.    Orthodox Jews have recently been given the right to refuse work which would require Saturday working without sacrificing their rights to certain welfare benefits. Which leads to the definition of what is religion and what is a cult or an association of those with a common belief.  Scientology has recently in effect been granted religion status.  Self describing Jedi Knights number 176,632 under a category â€œother religionsâ€ in the last census.  The question for our courts is where to draw the religious line when it conflicts theoretically or practically with procedures.  The most obvious collision course was and is the wearing of full face covering by witnesses and/or defendants who profess that their interpretation of Islam requires such garb.  Currently members of recognised religions quite correctly seek adjournments if court appearances coincide with days or times of religious observance.  Which begs the question of the definition of religion.  Charles Lawson, 60, from Hadley in Telford, successfully applied to  magistrates in Flintshire to postpone his hearing day because  his church`s Sabbath  holy day fell on the date listed for his appearance; notwithstanding that his â€œchurchâ€ on its website describes itself as a church without religion.   Perhaps my colleagues in Wales would have found differently if they had had access to the internet on the bench. One thing is for sure:- applications of this nature are certain to increase considerably.

Losing my religion Posted on 24th March 2013
McKOSHER FOOD FOR INMATES Posted on 03rd September 2016
Trying to Make Sense of the World Posted on 19th July 2016
Claims a female was murdered because of her religion deeply unhelpful, wrong and dangerous say police Posted on 19th June 2014
The straw men of the 'Shape of Training' Posted on 05th February 2015
Falklands: â€œlast thing we want is religion inserted in the disputeâ€ Posted on 22nd June 2013
London Muslim communities call for world peace following killings by IS Posted on 16th September 2014
The 'anti-logic' of racism & hate Posted on 05th September 2014
The Guardian: Religion in Camp Bastion: â€˜What people are asked to do here can lead to big questionsâ€™ Posted on 22nd August 2011
PARIS MASSACRES AND THE ENLIGHTENMENT OF BRITISH MUSLIMS Posted on 16th November 2015