DUMB AND DUMBER IN PETTY FRANCE 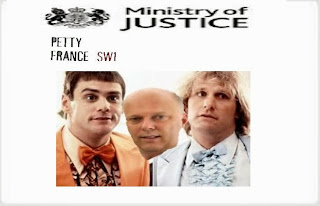 Sometimes it is almost impossible to overestimate the incompetence of the civil servants lurking in the corridors of Petty France London SW1 where the Ministry of Justice is housed.  The current Secretary of State is fond of grandiose press releases.  Just over a year ago there was the second reading of  The Prisons(Interference with Wireless Telegraphy) Bill.  In view of the obvious problems brought about by prisoners being in contact with associates in and out of jail banning mobile phones seemed a no brainer but just as banning drugs in prison is a laudable objective those involved in running prisons are well aware that initiating methods to stop all drugs getting to convicts would wreak havoc beyond their control. The ministry has now decided in its wisdom that the technology required to jam mobile signals is too expensive to justify its introduction the implication being that a year ago the costs involved were not too expensive or that they cannot do simple arithmetic.  Whether or not this is just a smokescreen for objections by the Prison Officers Association I know not.  There is a fairly full  report in today`s Independent. After HS2 undercosting, West Coast Mainline debacle, rumoured mothballing of as yet unlaunched aircraft carriers this is just another example of highly paid people who should be on the dole instead of leading pension proof existences wrapped around in tax payers largesse
I scratch my head in bewilderment at the efforts of those  queuing up to offer their advice to   the Rt Hon The Secretary of State for Justice  aka The Lord Chancellor.  There was a children`s  film called "Dumb and Dumber"  a few years ago. Perhaps those employed at our expense are striving to show that real life in the civil service can be dumber than the movies.