KEEP YOUR INSULTS SHTOOM UNTIL SUNDAY 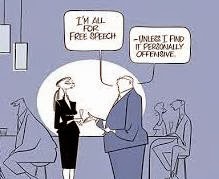 Although hardly as world changing as Halleyâ€™s prediction that the comet subsequently named after him would return at a pre determined year (although he did not live to see it) last year I posted twice {previous site host}  that s.5 of the Public Order Act would be amended.

1st April 2013
In common with many within and without the legal fraternity I have principled reservations with s.5 of the Public Order Act. The punishment for being convicted is in the scheme of things relatively modest; a maximum fine of Â£1,000. Convictions can be based on proving words were insulting and likely to cause distress and it is within those boundaries than the controversy lies.

A essay by Philip Johnston for CIVITAS has a lot to offer for a dank and cold Easter Monday to those who feel that this country`s reputation for free speech is gradually being eroded. Leveson has really changed the rules of the game. Abolition of s.5 might just indicate that there are still some who believe in free speech.

4th May 2013
Disregard the admitted drunkenness of the offender and consider the words â€œa bunch of sheep - shaggersâ€. Do they constitute an offence under s.5 of the Public Order Act? An English visitor to Wales admitted not to the simple charge of s.5 but the racially aggravated version of such. It is not unlikely that s.5 will soon be abolished. If this case is quoted as an argument for its retention by Welsh people of a delicate nature it will be because they have forgotten the British tradition of the lampoon ....â€ publicly criticise (someone or something) by using ridicule, irony, or sarcasmâ€.

This Sunday February 1st â€œinsultsâ€ will be removed from the sanction of s.5. Not before time the change means the offence now applies only to â€œthreatening or abusive words or behaviourâ€¦likely to cause harassment, alarm or distressâ€. S. 4A, which relates to the intent to cause harassment will still include â€˜insultingâ€™ in its wording.


So readers, keep shtoom on all these sheep shagger comments until Sunday.