NOT THE SHARPEST KNIFE IN THE DRAWER 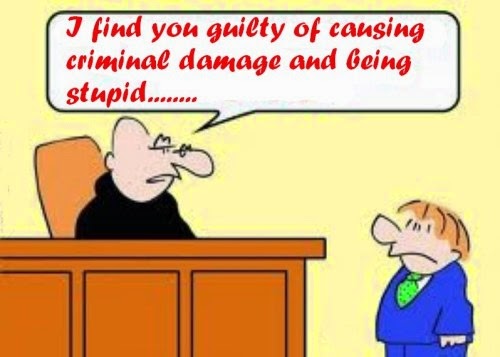 The current case management form used in our courts followed the guidance from the Senior Presiding Judge in 2009; â€œApplying the Criminal Procedure Rulesâ€. The underlying principle is quite simply that the innocent are acquitted and the guilty convicted. There are still some defence solicitors who refuse to be bound by these rules. However in practice it is very difficult to confound them when they insist on putting the prosecution to proof. Be that as it may occasionally a word or two on the form can mean the difference between acquittal and conviction.
Some months ago it seemed opportune to sit in the well of our court over which one of our D.J.s was presiding. A small group of men was alleged to have caused criminal damage on a deserted high street at around 3.00a.m. All but one of the group admitted the offence on the morning of trial and the singleton not having answered his bail was tried in his absence. Prosecution relied upon CCTV the images on which were not of the highest resolution but appeared to show the defendant`s active part in the alleged offending. At the police station where he had a lawyer there had been a â€œno commentâ€ interview and a pre prepared statement affirmed the defendant`s denial of knowing the others in the group and his being there. Before the prosecutor closed her case the District Judge asked to inspect the case management form completed on the 1st listing for the defendant who on that occasion was represented. He then commented for all to hear that written in the unmistakeable flowing black ink of a fountain pen equipped lawyer in the appropriate section 8 box was ticked â€œyesâ€ to the statement; â€œThe defendant was present at the scene of the offence alleged.â€ He continued, â€œAt 8.4 ( disputed issue) in the same ink was written, â€œpresence admitted but not part of group nor participant in alleged offenceâ€. The defendant was convicted in his absence and a warrant without bail issued for his arrest. Unlike his co offenders when he would have been  sentenced he would have  received no discount.