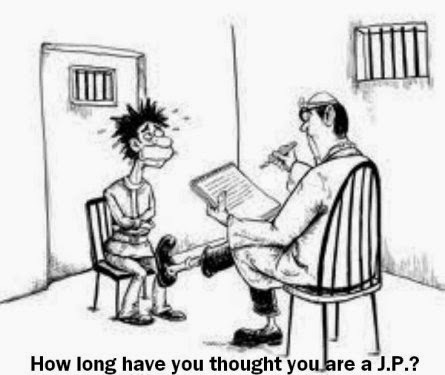 Sitting with a single colleague last month at 1.50p.m. having been told by our legal advisor that we had an application from a mental health professional under the Mental Health Act s.135  I casually asked whether she had ever been on a bench which had refused such an application and was unsurprised at her reply that she had not.
I have posted on my early days on the bench with senior colleagues virtually rubber stamping entry warrants by utility companies and police search warrants. My more recent experiences indicate that with warrants to detain an individual under the Mental Health Act there is a definite disinclination to refuse such applications. I can recollect two occasions in the last eighteen months when, sitting with one other, we agreed that the information presented was lacking enough weight to allow us to grant the warrant to detain. Indeed on one of these occasions the applicant was merely the â€œmessage boyâ€ and had no knowledge of the case apart from what had been written by his colleague which in itself was vague and mostly hearsay with virtually no medical history. He was advised, that if the matter were considered so serious, he should have a colleague with detailed knowledge make a further application ASAP.
I would urge all colleagues to consider very carefully, as I`m sure most do, such applications which are usually of high standard and be aware that as in findings of fact at trial there are certain thresholds to be met; the problem being that they are often more difficult to determine and upon them hangs a person`s liberty and our duty of public protection.