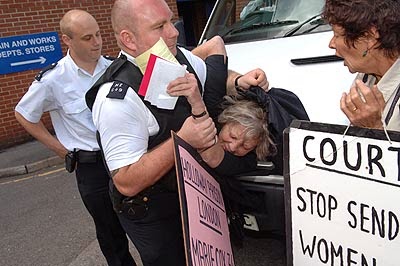 The woman, late twenties with an East European accent, was before us for sentencing. She was smartly dressed as if going out to dinner. She had been found guilty in her absence some weeks previously of two charges within a domestic context. She had denied receiving a summons although she had been present in court when being bailed to attend. We had a non report in front of us. Indeed it was the second non report since her trial. The probation officer explained that she had been written to twice at her address which was accepted as being her correct current place of residence to attend for interview prior to sentencing. For each appointment made a follow up text message had been sent to a mobile number which the offender had admitted as being that which she uses. No response having been received to the second appointment she had been arrested on a warrant. She asserted that she had not received any letters or texts from probation. Her â€œpreviousâ€ included several breaches of community orders and seven convictions for assault the last two of which resulted in one suspended and one immediate custody of several months. Of a four figure compensation order made three years ago not a penny had been paid. Despite the mitigation scraped together by her lawyer we had no doubt that an immediate term of custody utilising our powers to the maximum was justified. On hearing her sentence she immediately went into a violent rage. Perhaps she thought that dressing smartly and smiling at the bench would secure her from her just desserts. However unpleasant I might sometimes find it when pronouncing immediate custodial sentences and however unjustifiable such people as the Howard League might argue are such â€œshortâ€ custodial sentences there are times when there is no alternative. Such was the case described above.