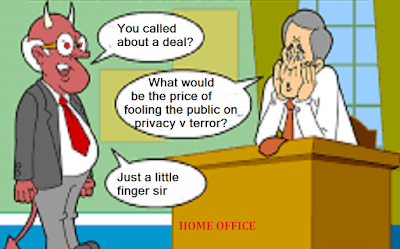 There`s an old adage that if you give the Devil a finger he`ll take your whole hand.  Never has this been so true as in recent years with the police maquerading quite successfully as Old Nick himself.  All this has of course been orchestrated by the Home Office which seems to run in the same direction at the same speed whosoever is the driver.Drinking Banning Orders or breaches of an ASBO are two early examples but the Regulation of Investigatory Powers Act 2000 truly allowed police, local authorities and others to follow Nick`s example and take the whole arm.  It is to be noted that I have been unable to source updated figures since I last posted on DBOs.  The current furore over the aptly nicknamed snoopers` charter arguably takes the controversy to a new level.

Dispersal Orders are not on the public`s agenda.  They were introduced late last year.  Unsurprisingly to those acquainted with the police enforcement of their powers at a level which is often at the extreme limits of their authority if not in excess of said authority  it seems that a familiar pattern is being observed.

Salami slicing of actual civil liberties, crying wolf by some libertarians, panic over security leaking and  real terrorist threats  are reducing the concept privacy only to what should be expected in the house`s smallest room.