BANKS AND BANKERS//JUSTICE U.S.A. AND NO JUSTICE U.K. 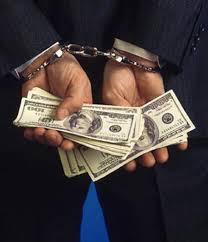 I can recall late last year my colleagues and I had to sentence an offender who was clearly in the category â€œso serious that custody is the only optionâ€. This chap was where he was for multiple non violent offending. One colleague found it difficult to agree in principle to this disposal because his offending was indeed non violent nor involved any basic dishonesty. Eventually with our third member`s assistance she was brought round to the logical conclusion we had each reached. This attitude to non violent offending is not confined to J.P.s. So called white collar crime attracts more than its fair share of apologists for non custodial sentencing in this country as opposed to America where financial fraud is generally dealt with more severely than here.Over the last decade it has not been uncommon to read that a financier, banker, accountant or similar has been sentenced to many years in prison in the U.S.A.for criminal offences involving $millions of other people`s money i.e. white collar crime. Such criminals in this country actually come to court in this country much less frequently never mind being sentenced to custody.  It seems the same thinking is behind the complaints that all the resources that have been devoted to phone hacking etc are disproportionate and should be concentrated on anti social and violent criminality.  Leveson did indeed release a hysteria virus upon which it could be argued more effort was placed on eradication than a deeper understanding of the requirement for a free press.

The imprisonment of men of eighty years or more for criminal actions which took place perhaps half their lifetime ago cannot possibly be in the public interest.  It serves only as the whipping post did in medieval times. What is in the public interest is that the Prime Minister should encourage  CPS and associated authorities to apply the law here to the activities of bankers and banks in this country who have been indicted/convicted in America for such crimes as fixing interest rates, laundering drug money and much else and seem to have  escaped  so far from the grasp of such organisations. He must decide soon enough if the Tory Party really has turned away from Theresa May`s description as the nasty party. With the government`s shares in the rescued banks being considered for sale failure to do so with his admittedly slender majority might forfeit the right of his successor a similar opportunity.

Now they face justice & What an abject failure: Posted on 14th August 2011
CCTV: Man attempts to rob banks with just a sports bag and a hand-written note ukcri.me/61894 Posted on 20th April 2015
A Worthwhile Speech From A Top Wig Posted on 19th August 2013
Hail To The (Lord) Chief Posted on 17th July 2013
Policing Minister: Swift Justice â€˜Must Be The Ruleâ€™ Posted on 15th September 2011
Mersey Beaten Posted on 29th October 2013
Bankers Bonuses Posted on 28th January 2012
Mr Justice Saunders Ruling on Application to discharge jury in R v Coulson, Goodman and Others Posted on 25th June 2014
Nothing to See Here Folks, Move Along Please Posted on 08th May 2015
Errâ€¦ I thought there was no money? Posted on 03rd December 2011