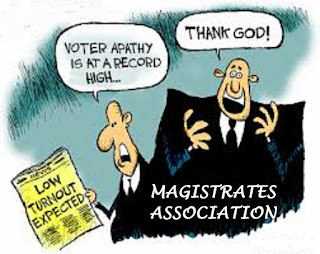 When elections of any sort for any post are held and the winner(s) declared, after their majority is announced the next figure usually published is the turn out.  This latter number can often cause as much interest as all the others put together an example being the percentage of voters in the recent general election who did not vote Conservative or the Conservative vote being expressed as a fraction of all eligible voters.  These figures have been bandied about in comparison to the recent overwhelming vote to strike by the workers on the London Underground.  I make no comment on the relative significance of either percentage  vote but merely as an illustration.  In a similar vein I have for readers to access here the results of the recent election for the next chairman of the Magistrates Association.  In my opinion my former colleagues who have remained members of MA  have nobody to blame but their own apathy for the likely inadequacy of their representatives vis a vis govenment over the next three years.