AD NAUSEAM AT THE MINISTRY OF JUSTICE PRESS OFFICE 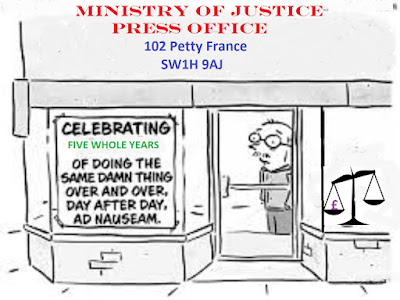 It seems the penny has finally dropped........upon the editors of this country`s national media; that the criminal justice system is crumbling at its roots these roots being magistrates` courts where over 90% of criminal matters begin and are concluded.  Since 2010 when the first court closures began there would be an occasional protest in a local newspaper serving the area and a generic response from the local M.P.  By and large national media avoided the issue.  The s*** is now hitting the MOJ fan.  Grayling`s ban on books for prisoners has been lifted but nothing else of note has taken place since Michael Gove took over his unlamented predecessor`s chair at Petty France.   The Law Society Gazette many of whose subscribers not unnaturally have a vested interest has kept the topic bubbling as its latest edition indicates but it reaches a limited audience.  National media have been relatively quiet on the topic. However, today both BBC and the Mirror have made limited headlines on the further closures planned for this parliament.

But and it`s a big but; why have the  senior judiciary remained silent at least in public?  Are they so concerned with their pensions and their so called constitutional position?  Are they all awaiting retirement when they can excoriate this and the previous government`s emasculation of our justice system including its latest manifestation in the Courts Charge where once again the MOJ press office taking its cue from Pravda, that late unlamented organ of a not so free press beloved in its heyday by Marxists everywhere, repeats its lying mantra in the Law Society Gazette, " A ministry spokesperson said: â€˜It is right that convicted adult offenders who use our criminal courts should pay towards the cost of running them. â€˜The introduction of this charge makes it possible to recover some of the costs of the criminal courts from these offenders, therefore reducing the burden on taxpayers." when it has been universally denounced.

These people really do exist in a different dimension where in order to make something seem true it only has to be repeated ad nauseam.