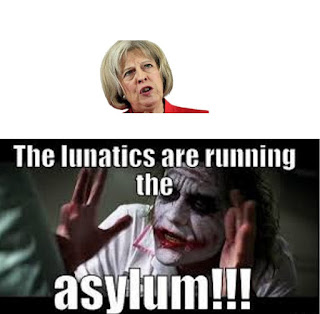 I am acutely aware that perhaps a higher percentage of my posts than I ever imagined would be devoted to the goings on regarding the police forces of this country.  Perhaps that is because for the last five years they have become the government`s most visible target of "austerity" in what could loosely be described as the totality of our justice system eclipsing the salami slicing of everything associated with the operation of our courts under the control of the MOJ. Of course as far as I am aware no Chief Constable or Police and Crime Commissioner has resigned in protest although an increasing number of those officials has left for other rather unsavoury reasons.

Theresa May despite her rhetoric will never achieve or replicate the heights reached by Margaret Thatcher. She is vinyl posing as leather. It would, however, take a second glance to realise that her latest attempt to somehow improve police performance in the light of suicidal funding cuts during her tenure at the Home Office by suggesting that Fire Chiefs could become Chief Constables is not some kind of musical chairs pantomine where Humpty Dumpty falls off his wall.

In the old days such an attempt to increase an organistion`s remit would be called empire building relying on the basis that bigger is better.With this proposal we truly are entering an era where there really are lunatics running the asylum.