FREEDOM OF INFORMATION ACT IN NUMBERS 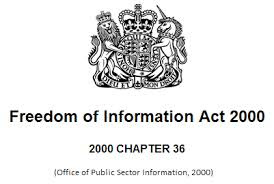 In his memoirs published five years ago Tony Blair described bringing in the Freedom of Information Act as the worst thing his government did in office. Not unnaturally that statement upset millions of people.  Nevertheless that admission alone has a corollary; the FOI is now an indispensable tool for many this blogger included.  It is hard to believe that any future government would do likewise just as it is hard to believe how as a country where there still is a semblance of free speech we could function now without the facility it offers. The story in numbers is here.