DEATH OF THE MAGISTRACY IS A LITTLE CLOSER 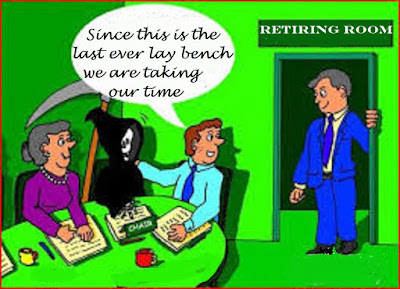 The iniquitous courts charge is finally beginning to make the news in the general press. The Times behind its paywall has an article by the long serving Frances Gibb describing how lay benches are tailoring financial outcomes where there is a sense of injustice in not so doing owing to the non means testing of the "charge". There has been no news as to whether District Judges have taken a similar route where intolerable financial burdens would have been imposed if the "rules" had been followed.  I would suggest that these professional civil servants would not dare  upset their paymasters by veering off the straight and narrow of the Guidelines. I think this is but a very early indication of independent J.P.s` individual defiance of government.  It is unlikely there will not be more pieces of legislation during this parliament where similar considerations might apply.  Such open opposition to government law making will just hasten the day when the lay bench in a courtroom will be a historical footnote.