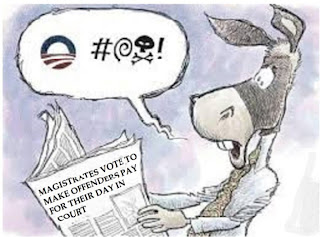 The Magistrates Association has recently disclosed its answer to the Justice Select Committee`s  request for consultation on the Courts and tribunals fees and charges inquiry.  The vast majority of the just under 1,000  responses was predictable: overwhelming opinion against the non means tested charges. What was of more interest to me was the response on p9 to the question; "Do you agree with the principle of a courts charge so that offenders contribute to the cost of the state bringing them to justice?"

My opinion for what it`s worth is that a justice system in all its multiplicity affordable,  available and open to all is the second of the two pillars  of our system of government, the other being defence of the realm, the provision of which government alone must take total responsibility including of course, the  cost.

It seems that over half my ex colleagues are taken over  by the hypnotic mantra of austerity or they  do not realise the enormous philosophical and political meaning of what they voted for.