THE COURTS CHARGE AND MAGISTRATES AT THE COAL FACE 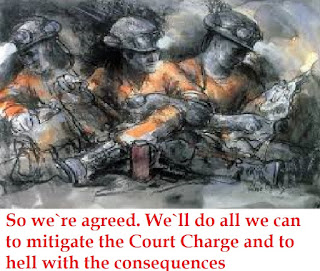 On 10th September I posted on the contents of a letter sent 09/04/2015  to all west and north east London  benches within the kingdom of justices` clerk Julian Vantyghem and highlighted the following:- "There have been various comments in the media about the introduction of this charge [Criminal Courts Charge].  I shouId remind you that magistrates are required to refrain from commenting on matters of political controversy at any time but especially at such a sensitive time as this". I would assume that readers of this blog are well aware that  50 or more Justices of the Peace  have resigned as a direct result of this iniquitous legislation.  There have been media reports from Cornwall to Carlisle of how benches are tailoring their sentencing to avoid as much as possible the imposition of financial obligations which they considered so unreasonable that the likelihood of their being paid was pie in the sky.  Currently there have been no publicly disclosed sanctions against those ex colleagues.  In my experience this is as near to a Peasants` Revolt as  magistrates have ever been.  However where those 14th century peasants had a leader the resistance to the Charge has arisen spontanrously.  It is now considered inevitable that the Charge, at least in its current form, will not last until its designated three year review. Indeed it will be surprising if it continues until next April.

It is not before time that J.P.s,  fed up with the kowtowing "In the Thick of it" or "Yes Minister" approach to government  followed decade upon decade by the "waiting for my gong" cardboard cut outs of the Magistrates Association,  decided at the coal face to make their point of view heard.  I salute them. Justices` Clerks will admonish their behaviour at their peril.