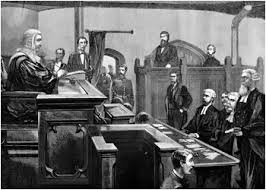 I think it is reasonable to assume that less than half the adult population has ever attended a court as defendant or witness.  Of those who have a minority only will have had that experience in a crown court.  Thus any statistics on satisfaction or otherwise with these courts within the justice system are based on a relatively small sample cf eg the NHS.  With that in mind a report published this week  by the Criminal Justice Alliance makes interesting reading.  Whilst much of the content might be considered controversial the recommendation that judges and barristers might discard their artificial headgear certainly meets with my approval. Robes also come in for crticism.  A history of court dress is illuminating but is purely just that; a history.  Language used in court is also of considerable interest to the authors.  A light hearted translation of the commonly used phrases heard in court is available here for readers` amusement.

How far Michael Gove is prepared to resist budget cuts  whilst in charge at Petty France is a moot point.   One thing seems certain and that is that he will be unlikely to risk unnecessary ire from the legal profession purely in the name of modernisation of the courts process.