PARIS MASSACRES AND THE ENLIGHTENMENT OF BRITISH MUSLIMS 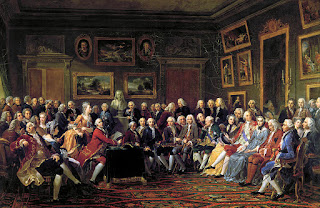 From time to time over the last decade questions have been raised in various media about the status, effectivity and influence of Sharia law in the U.K. For many observers and members of the Islamic faith the perception of Sharia law is as important as its reality.  It some cases its function has been likened to a Jewish religious court or Beth Din. The difference however is one of quantity over quality.  There are around 263,000 self defining Jews in the U.K. of whom about a quarter consider themselves as "traditional" and 16% as ultra orthodox or charedi. Generally it is those members of the charedi community who make use of a Beth Din.  In contrast to those numbers there are about three million Muslims in the U.K. How many could be described as Islamists is open to conjecture. One thing is certain and that is as a result of the Paris massacres the blandishments of many on the topic will no longer be taken at face value.  When opinions of wannabe jihadists will almost certainly lead to interest by the security services such opinions will necessarily be kept circumspect.  And that is why the actions of a leading Jewish academic Professor Geoffrey Alderman, whose article in the current edition of the Jewish Chronicle should be taken on board by Muslim clerics, who perhaps have been less than forthcoming about the leanings of some of their co-religionists and be an example to follow.

The cultural freedoms available for over a century to Jews in this country eg schools, kosher slaughter or shechita, circumcision have been used as an argument that Muslims should have the same freedoms.  The difference is that there are twelve times as many Muslims as Jews and that the latter have for two thousand years lived as a minority  in every country of their  residence until the establishment in 1948 of the State of Israel whilst Muslims have usually lived as the majority religion in states where that religion has been practised. In Western Europe they live as a minority religion in countries which are ostensibly Christian in history, morality and outlook.

Perhaps the weekend`s atrocity will hasten the day when eg progressive Muslims can openly declare their being gay without the opprobrium of their communities or forced marriage will be declared unacceptable for Muslims in a modern western country where the Judeo Christian heritage has managed to evolve into a 21st century basis where neighbours whilst perhaps not in a state of enlightenment can generally still manage to live in peace and harmony.