DO J.P.s HAVE THE CAJONES? 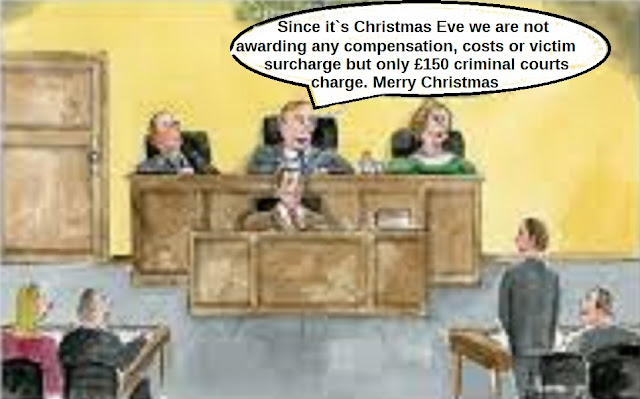 So we will soon see the back of the most ill thought out regulation involving the courts since I became part of the system.  Questions remain; will those few who have paid the charge be refunded?  I doubt that very much.  Will J.P.s impose the charge for its remaining couple of weeks?  I suspect that many Deputy Justices` Clerks are   in a turmoil realising the questions to be posed by magistrates and their bench chairmen on Monday. Their bosses; the two dozen Justices` Clerks who are hoping to climb the civil service greasy pole, will do nothing to prejudice their own positions.  There is little doubt in my mind that financial penalties will be adjusted by individual benches next week until Christmas Eve to mitigate the effects of this regulation now in its death throes.  The same will not occur in courts where District Judges preside. What a rare opportunity this presents for J.P.s with cajones to show that they really are representatives, not necessarily local, of the greater society and to defy their legal advisors who cannot condone any  decision that might be unlawful and who will make clear notes if a bench defies their advice.

"THIS IS YOUR FINAL FINAL CHANCE" Posted on 15th July 2015
Timing is everything Posted on 03rd December 2010
SENIOR JUDICIARY HAVE NO CAJONES Posted on 23rd November 2017
DECRIMINALISE DRUGS:DON`T BET ON IT Posted on 07th March 2017
THE UNACCEPTABLE WORDS OF A DISTRICT JUDGE Posted on 05th August 2016
TO PUNISH OR NOT PUNISH;THAT IS THE QUESTION Posted on 17th April 2019
MUSINGS ON MONDAY Posted on 21st March 2016
NOT TOO HOT TO HANDLE Posted on 05th November 2014
THEIR LORDSHIPS` PRICE OF 1000 PIECES OF SILVER Posted on 16th March 2021