PROBLEM SOLVING COURTS WILL BE A PROBLEM 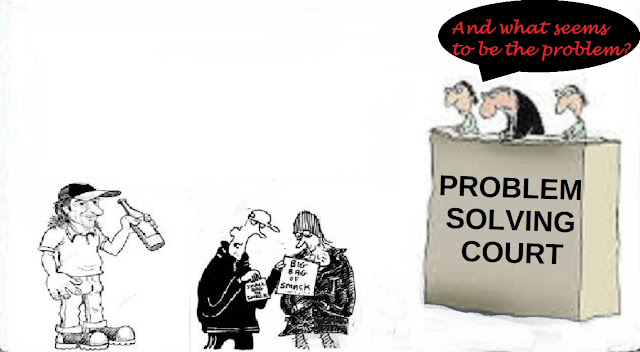 A recent post was a "hat`s off to Michael Gove" for his resolution in signalling the imminent demise of the criminal courts charge.  This action demonstrated political, moral and common sense; a combination hardly common in a cabinet minister but certainly to be valued and praised. Therefore it was somewhat of a surprise to this J.P. now on the supplementary list to read that this minister thinks that judges and magistrates could take on the role of helping offenders to overcome drug or alcohol addictions following examples of such practices in some American courts.  I will not comment on the proposal concerning judges. They are paid civil servants beholden to government for putting bread on their tables and pounds in their pension pots.  But as far as magistrates are concerned that is a totally different scenario.  On being sworn in the following oath is made by Justices of the Peace:- â€œI, _________ , do swear by Almighty God that I will well and truly serve our Sovereign Lady Queen Elizabeth the Second in the office of ________ , and I will do right to all manner of people after the laws and usages of this realm, without fear or favour, affection or ill will.â€  This undertaking served me well as it has for many thousands over the centuries. It does not seem to stand up to scrutiny within "problem solving" courts either etymologically or practically.  There are three courts available in which  J.P.s can follow that oath; the criminal court which is the basic place of endeavour for all, the youth and the family court, the latter two being optional for those with interest.  In all these decisions have to be made which are generally up or down, left or right, right or wrong although in the family court sometimes the outcomes are less clear cut. By their very proposed title "problem solving courts"  are not to be compared with the existing structure.  They could be described as counselling on steroids and as such it would appear that those presiding over them should be appropriately professionally qualified.  Indeed with drug legislation under constant review as to decriminalisation eg Alaska, Colorado, Oregon and Washington in the USA where cannabis is legal and Portugal where there is wider decriminalisation medical intervention and supervision would seem much more appropriate than training a small coterie of magistrates for what seems a non judicial function.